Watch John Fogerty Do An Impromptu Performance Live On Conan 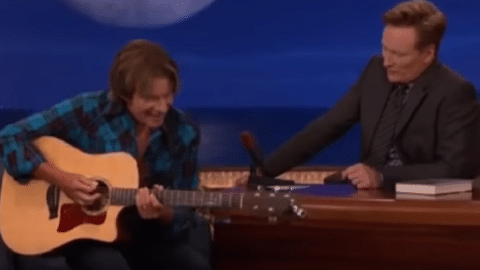 While he has written other musical masterpieces, one of John Fogerty’s best known works is definitely the 1971 classic Have You Ever Seen The Rain. Not only did it hold up well even after over forty years but it has been covered dozens of times and used in several movies and TV shows. And so during his 2015 appearance on Conan, the audience was treated to an impromptu performance of the aforementioned track.

The host Conan O’Brien initially asked the iconic rocker if he could play “a little something.” And he gave Fogerty Andy Richter’s guitar. Fogerty then asked, “What would you like, a little ‘Louie Louie’?” which made Conan laugh. Without further ado, Fogerty proceeds to perform an acoustic version of Have You Ever Seen The Rain to the delight of everyone in the studio.

And can we just say? John Fogerty still has it especially when it comes to his vocals. He sounds so good live!

Regarding the song’s meaning, there have been speculations in the past whether it refers to the Vietnam War or the ’60s as a whole. But Fogerty said during a show in Arizona back in 2012, “This song was originally written about a very sad thing that was going on in my life. But I refuse to be sad now. Because now this song reminds me of my little girl, Kelsy, and every time I sing it, I think about Kelsy and rainbows.”