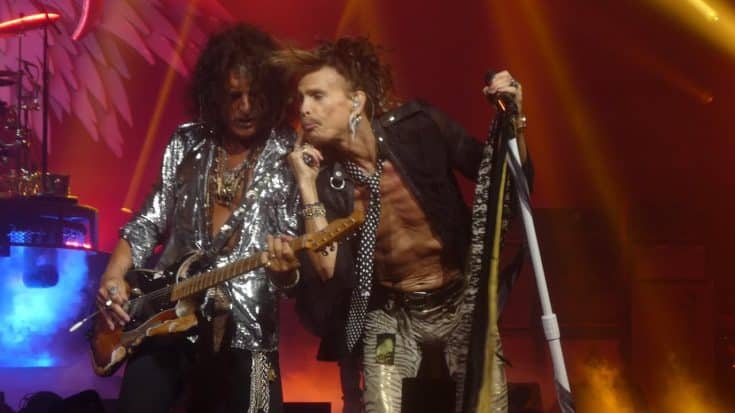 Joe’s Not Having It

They’ve been playing together for almost five decades and things probably went extremely crazy during they heyday. And they’ve spent countless hours on the road and in the studio. So basically, the boys from Aerosmith aren’t mere bandmates, they’re practically brothers especially Joe Perry and Steven Tyler a.k.a. The Toxic Twins. And like any family, there will be bouts of misunderstanding, arguments, and beef every now and then. There have been several well-documented tension between the two on-stage – like the time Tyler accidentally cracked Perry’s head with a mic stand and the latter stormed off.

And so what happened during a recent Aerosmith concert at The Theater at MGM National Harbor, Oxon Hill, Maryland is pretty tame all things considered.

They were performing “Walk This Way” when Tyler decided to spice things up by asking Perry for a kiss on the cheek. Perry wasn’t having it though and kept ignoring Tyler. But Tyler kept at it which infuriated Perry – watch the heated exchange below.

After making up a few minutes later, Tyler said:

“Oh I get a kiss now, were you too busy? Kiss me now, give me a fu**ing kiss! Hard ass motherfu**er right there.”

This isn’t the first time Tyler forced Perry for a kiss. He posted a clip on his Instagram page last June to which Perry commented, “You made me an offer I couldn’t refuse.”