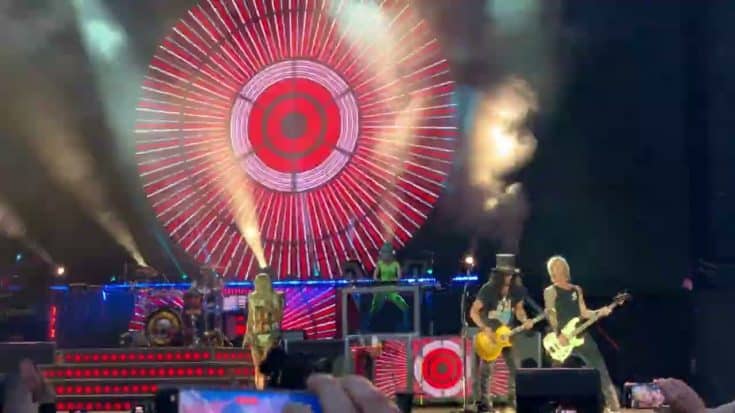 Guns N’ Roses was joined by country singer Carrie Underwood onstage during their show in London on July 1.

Underwood made a guest appearance during the performance of classic “Sweet Child O’ Mine,” and came back for the set-closer “Paradise City” at the 63,000-capacity Tottenham Hotspur soccer stadium. It was the same both songs Axl Rose performed with Underwood when they teamed up onstage during the Stagecoach Festival in May, which Underwood described as “the greatest night of my life.”

Supporters of Underwood have known that the singer has been a fan longtime GN’R fan. Aside from the two songs Underwood and Rose performed, she has done covering other GN’R hits such as “November Rain” and “Patience” in her concerts. In her 2020 appearance on The Tonight Show, she told host Jimmy Fallon:

“It’s hard when you meet your heroes, you know, because I do consider [Axl] to be somebody who taught me how to sing. and I was like, ‘What if I meet him and he’s not everything I want him to be?’ But he was, he was super cool and nice.”

She recalled a trip to Las Vegas to see Rose’s band while her own group was on tour:

“It’s kind of a life-long dream of mine I never thought would happen. I couldn’t waste that opportunity, so I abandoned my husband, abandoned my children, went to Vegas and saw Guns N’ Roses. Amazing!

“Usually when I go to concerts I’m like, in a box on the side, which is great. … But you miss the energy of the crowd. Because we were in Vegas, we were just in there with everyone else; it was absolutely incredible. You could feel everybody – everybody was screaming, I was screaming – I was like, ‘I’m never gonna see none of these people ever again. I’m gonna act like a fool!'”