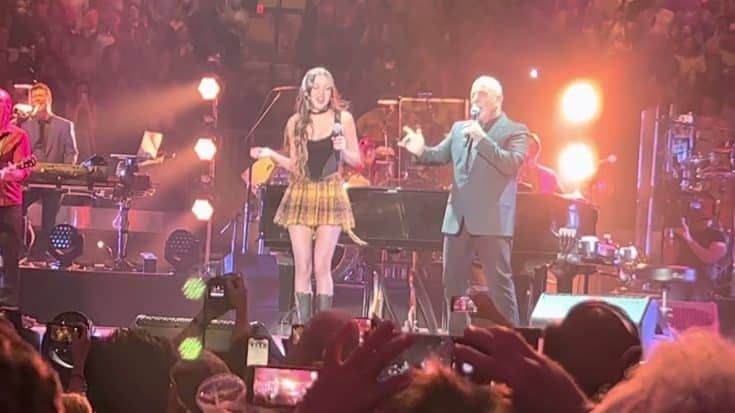 The duo performed Rodrigo’s 2021 hit “Deja Vu” followed by Joel’s 1983 classic “Uptown Girl.” Joel introduced Rodrigo to the crowd as a “young musician” who was a “very talented singer and songwriter,” and noted some of her achievements, including three Grammys, an American Music Award and “all kinds of awards.” Upon going to the stage, Rodrigo said:

“Thank you so much for having me, Billy.

“I’m such a huge fan, and I kind of wrote this next song about you.”

The lyrics to “Deja Vu” contains a story about Rodrigo introducing Joel’s music to her ex with the line that includes: “I’ll bet that she knows Billy Joel / ‘Cause you played her ‘Uptown Girl’” and “Play her piano, but she doesn’t know that I was the one who taught you Billy Joel.”

During their performance of “Uptown Girl,” Joel said:

“I like her music and so do my kids.”

“Adele is a phenomenal singer, kind of a [Barbra] Streisand throwback.

“Taylor [Swift] is also a very talented girl, and she’s productive and keeps coming up with great concepts and songs and she’s huge. You have to give her high marks. She knows music and she knows how to write. She’s like that generation’s Beatles.”

Watch Joel’s and Rodrigo’s recent performance on the video below.