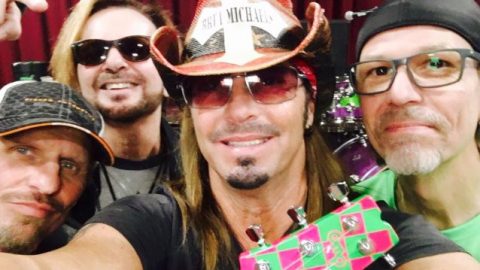 Bret Michaels admitted that talks with Poison might end up for them not making a new album.

Michaels is still discussing the chances of writing and recording a song his bandmates and wanting to bring back the spirit of their biggest hits. In a recent interview, Michaels told the Arizona Republic:

“I know I could get outvoted on this.

“but I said, ‘Guys, I beg you. Let’s just write a straight-up rock song’ – a ‘Nothin’ But a Good Time,’ but modern, ‘Talk Dirty to Me.’ A great guitar riff, good lyrics, a hook in the chorus – just something that’s fun for us to write. And who knows? Maybe it could be a modern-day ‘You Shook Me All Night Long.’”

However, Michaels thinks that they won’t get much further than releasing a single song. He added:

“You give us a whole album, you’ll get the best prize fight you’ve ever seen.”

He noted that Poison gets along these days, but jokingly said:

“Then the next day we’re playing on stage together and I’m like, ‘I’m sorry I knocked your tooth out.’ They’re like, ‘Yeah, I’m sorry I hit you in the gut.’”

He jokingly added that their fights is an attraction at their live shows:

“I think half the time, people who come to Poison, they’re like, ‘Wait, good tunes I can sing along to, good pyro and occasionally a prize fight? You get your money’s worth.’”

Meanwhile, Poison is currently on the road for the ongoing Stadium Tour with Motley Crue and Def Leppard with Joan Jett.