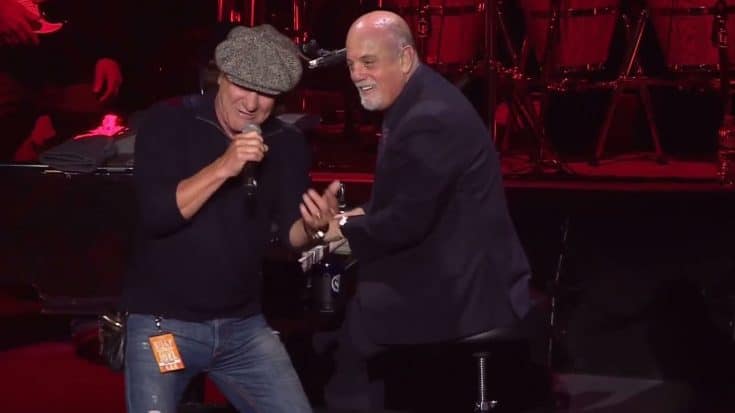 Billy Joel shook up the house down of Madison Square Garden and surprised the crowd by bringing out AC/DC singer Brian Johnson for a guest appearance.

Johnson performed the AC/DC classic “You Shook Me All Night Long,” with Joel on the piano and the rest of his band on March 21 2014 as part of Joel’s monthly residency at the “world’s most famous arena.” Joel introduced Johnson to the stage and referred to AC/DC as “maybe the best band I ever saw in my life.”

Later, after the performance, Joel explained to Jimmy Fallon of the diversity in his concerts during his appearance on The Tonight Show:

“We mix it up. I don’t ever want to do the same show twice. We’re bringing in some of the more obscure songs, but we do enough of the hits and songs that people know and stuff that we like to do. We’re making it up all the time.”

Watch the video below. Some of the comments said:

“Brian’s proceeds to thank everyone he can find on stage. That’s class.”

“Probably the most fun Billy Joel’s band ever had”

“Brian Johnson is just an awesome, humble dude, and Billy Joel is pretty damn cool to invite him up on stage.”