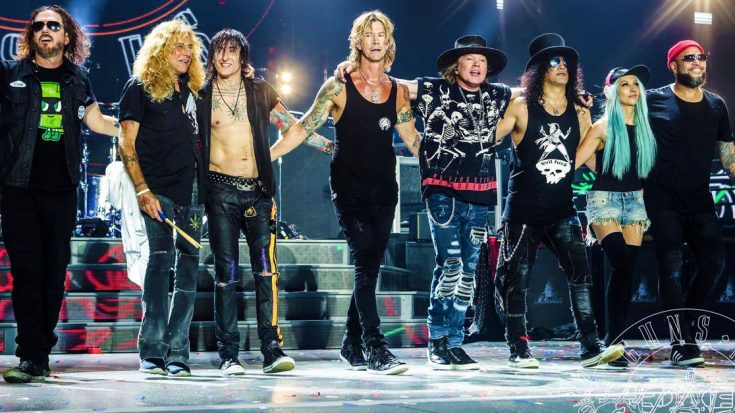 And It’s Not Who You’d Expect!

Guns N’ Roses are having the best year of any band’s career, fresh off of a wildly successful US comeback tour and about to kick off a tour of South America before embarking on a quest for rock and roll world domination with tours of Europe, Japan, and Australia. Before they took off for Peru this week, Guns N’ Roses left their mark on the Seattle Seahawks’ October 16 game against the Atlanta Falcons when keyboard player Melissa Reese surprised everyone by picking up a microphone and delivering one seriously killer take on the national anthem.

Fun Fact: Melissa’s connection with Guns N’ Roses reportedly comes via Bryan “Brain” Mantia, who drummed with the group from 2000 until 2006.

Reese, who’s been with Guns N’ Roses since the band’s April 1st show at The Troubadour in West Hollywood, was seen all summer from her spot onstage sharing keyboard and backing vocal duties with Dizzy Reed, hard to miss with her baby blue hair and massive headphones; now, she’s seen taking a starring role as she delivers one of the most important parts of American sporting events and y’all, we couldn’t be more proud of her. Check out video footage of Melissa’s performance below and join us in hoping against hope that if there’s ever another Guns N’ Roses album, she’ll be featured as more than just a keyboard player and backup vocalist!