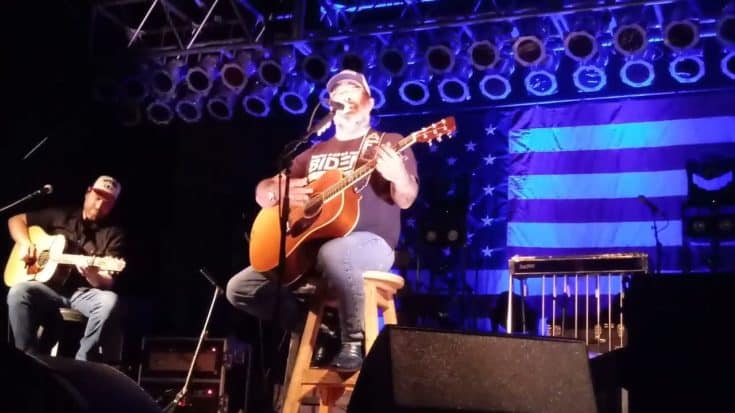 Staind frontman Aaron Lewis has recently debuted a new acoustic song called “I Ain’t Made in China,” during his show at the Psycho Silo Saloon in Sheffield, Ill on Aug. 4.

The singer has always been bold in expressing his patriotism onstage over the years. When several fans suggested for him to play “Just the Tip,” he assured them that he had a “way better song” to perform instead. He then introduced the new song to the crowd, saying:

“This is a brand new song, I haven’t even recorded it yet.

“It’s a light and fun song. I wear it right on my sleeve, I ain’t gonna try and sugarcoat nothing.”

He sang the song with the lyrics:

Those in attendance seemed to enjoy the song, but others online have reacted negatively in the comment section of the video. One viewer said:

“I know I can’t be the only rock fan in their 40s that wishes they could take back every dollar they ever contributed to Staind when they were younger.”

“These lyrics are the most low hanging fruit and these MAGA types are paying out the ass for it. Kudos to Aaron Lewis for joining the MAGA grifter ranks so successfully.”

Last month, Lewis declared that he is not reeling in the political talk anytime soon, according to a speech he gave to a crowd in Columbus, Ohio where he went off about the U.S. government. He stated:

“This country gets handed from generation to generation so that we are now the stewards for our children and for our grandchildren and so on and so forth, and if we sit here and allow them to destroy the best country that has ever existed on the face of the earth, in the history of mankind, then we deserve to go down with the ship.

“I’ll tell you what: I ain’t going down like that. I ain’t. I will run my fucking mouth until the day I die. ‘Cause it’s the truth. And facts matter. And facts have become disinformation sometimes. And we sit there and we let it happen.”

Watch the fan-filmed video performance below.