Watch A Young Cliff Burton Jam “For Whom the Bell Tolls” 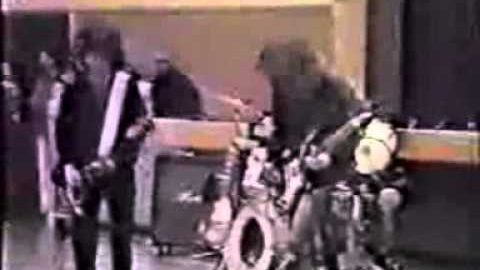 The late Metallica bassist, Cliff Burton, infused Metallica’s arrangements with a musical flair all on his own, however, his songwriting contributions sometimes seem under-appreciated.

Burton tragically died in a 1986 bus crash. But before joining Metallica, his musical genius is evident in a video where he is competing in a 1981 Battle of the Bands with his band, Agents of Misfortune. In the video, Burton performs the opening riff from Metallica’s Ride the Lightning single, “For Whom the Bell Tolls.”

It happened three years before it was officially recorded. The band also included guitarist Jim Martin, who would go on to join Faith No More after Agents of Misfortune.

The Hayward Area Recreation Department organized The Battle of the Bands in Hayward, California. At the time, Agents of Misfortune were led and supported by Black Sabbath’s Dave Donato. The band played a freewheeling style of metallic rock led by Faith No More’s Jim Martin.

In the video, the “For Whom the Bell Tolls” riff emerged toward the end of one section, and some shades of Faith No More’s 1990 hit, “Epic,” can also be heard. Martin said in 2012:

“I sure miss Cliff.

“We could do any song and twist it up horribly. I think if there were an opportunity to collaborate [now], we would write something new. Put Dave in there on the drum kit and create something Cliff’s mother would call, ‘Fucked-Up Weirdos’”