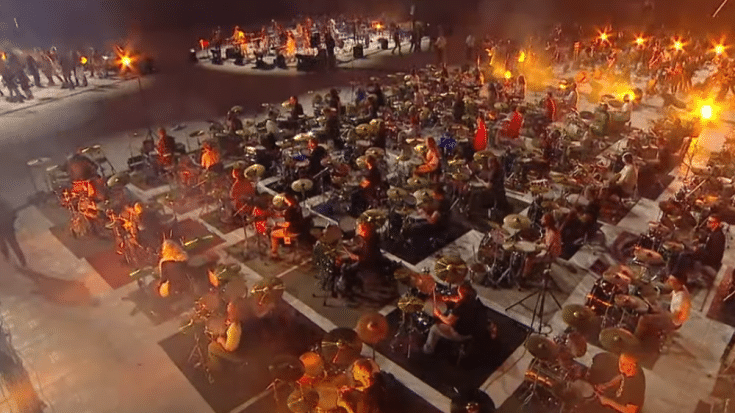 The show was held in celebration of the Rockin’1000 birthday. They featured musicians from 25 countries gathering together to perform classics from The Who, Pink Floyd, and Guns N’ Roses among others.

Rockin’1000 were joined onstage with French rock singer Matthieu Chedid and played a set that also featured covers of “Hells Bells” by AC/DC, David Bowie’s “Space Oddity,” Steppenwolf’s “Born To Be Wild,” “Killing In The Name” by Rage Against the Machine and “Seven Nation Army” by The White Stripes.

They’ve also done a tribute performance of “My Hero” in honor of the late Foo Fighters drummer, Taylor Hawkins. 1000 Rockers started in 2015 performing “Learn to Fly” in Cesena, Italy. The video got more than 32 million views and since then, they have been organizing concerts with 1000 musicians playing together.

Watch the incredible performance below. Some of the comments read:

“What a hell it should be to organize this! Very well done and LONG LIVE MUSIC!”

“This one may be my favorite of this wonderful concert! VERY proud and glad to be a part of it. Stick together, and play rock ‘n’ roll”

“Love it! Epic! I wish I was there listening and experiencing that moment!!! You guys rock!!!!”