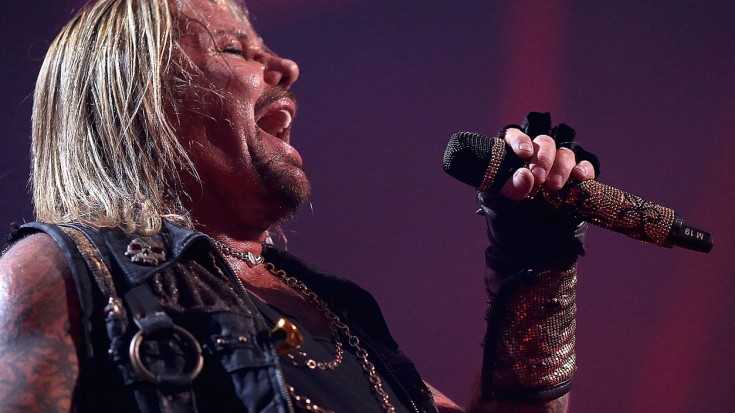 If former Mötley Crüe frontman Vince Neil is worried about the legal storm surrounding his April 2016 assault of a woman in Vegas, he sure isn’t showing it! Last weekend saw the 55-year-old singer hit the stage with his solo band at Illinois’ Arcada  Theatre, performing both solo material as well as taking it way back with a large handful of Crüe classics – totally deviating from his former bandmates who vowed to never again play material from Mötley Crüe’s catalog after the band split on New Year’s Eve.

Vince Neil On Why He Still Plays Mötley Crüe Songs

“I want to be someone who shows appreciation for all our fans. Those people have all the love for the Crüe stuff, and I was the guy singing those songs. That gave me a great life for 30 years.”

Tackling iconic tracks like “Dr. Feelgood,” “Kickstart My Heart” and “Girls, Girls, Girls,” Neil seemed to be having a great time with his new band, comprised of Dana Strum and Jeff Blando from Slaughter and drummer Zoltan Chaney, and while it’s not exactly the powerhouse vocal performance of Vince’s youth, there’s a lot to be said for the nostalgia factor that continues to draw devoted Mötley Crüe fans out to see him continue to hit the stage night after night, and for Vince’s steadfast dedication to his craft. Here he is singing “Home Sweet Home” and if the memories attached to this Crüe classic don’t get you, then the way he’s engaging with his crowd surely will!