Slash And Axl Rose Share An AWKWARD Moment On Stage – This Will Make You Cringe! 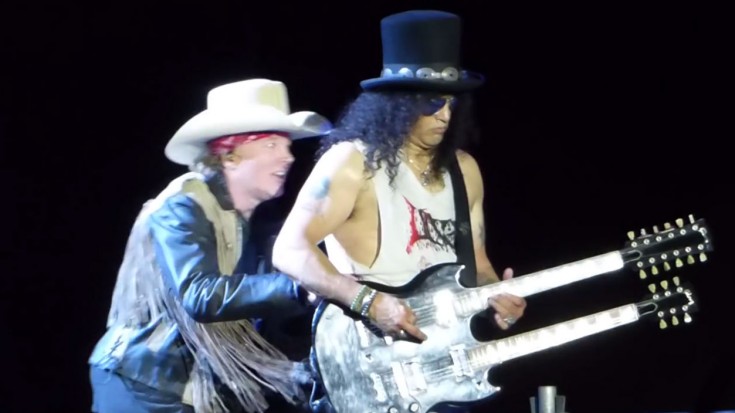 Slash Is A Pacifist In A Tickle Fight!

So, not sure if you’ve heard, but Guns N’ Roses are back together! They are currently selling out stadiums across the nation and will soon to so in South America on their full length tour. They sound better than ever and despite Axl Rose starting off the tour with a broken foot, Axl quickly recovered and is tearing up the stage with his iconic showmanship. The rest of the band aren’t too shabby on stage either. Slash, Duff, and the rest of the new blood are consistently putting on an excellent show for the audience. Still, for as good as every other band member is, it’s still Axl’s responsibility to be the soul showman that draws the attention. Axl has to once in a while mix it up on stage, so he attempts to interact with Slash in a new way, and the result is… awkward!

What you’re about to watch is Guns N’ Roses perform Knocking on Heaven’s Door in Philadelphia, Pennsylvania. During the instrumental Axl Rose goes up to Slash and tries to tickle him, and the visual is not exactly what’d you call laughable.

Now, I think both men didn’t perceived the moment as being awkward. After all, Slash and Axl know each other VERY well, so it might’ve been planned. Still, it would’ve been a LOT less awkward if Slash was at least ticklish, but whatever the case, it still makes for an interesting GNR moment. See for yourself!