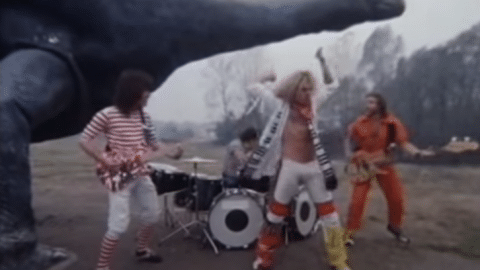 It’s A Never-Before-Seen Promotional Video – Check It Out

After four decades, a long lost promotional clip of Van Halen’s “So Is This Love?” finally surfaced on the internet. On the video below, it shows the legendary band lip-synching to their 1981 classic hit beside life-size dinosaurs. It was filmed on November 14, 1981 in Italy.

“At the end of 1981 Van Halen filmed some videoclip settled in a Jurassic park in Italy, the “Prehistoric Park” of Rivolta D’Adda (near Milan),” reads a caption by YouTube user Kosmo VanHalenItalia. “The band was engaged in a European tour for promoting “Fair Warning” These videos aired on Italian state television, RAI 1, during a TV show called “Happy Circus”.”

For years, there have been speculations about this mysterious footage especially since there were photos of Van Halen performing in a dinosaur park shot by the band’s roadie – photos that appeared on the 1995 issue of The Inside. At the time, nobody had any idea about the concept of the video.

It may be low budget but it has since achieved mythical status among hardcore fans. Besides, David Lee Roth strutted and did his iconic high kicks as if they were playing in front of thousands of fans. Watch it below.