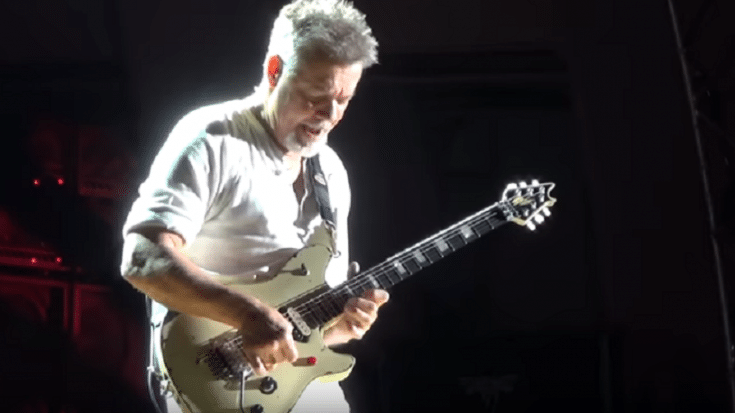 No Confirmation From EVH

A few days before David Lee Roth said in an interview that he thinks “Van Halen’s finished,” TOTO guitarist and Eddie Van Halen’s longtime friend Steve Lukather revealed on a recent episode of The Eddie Trunk Podcast that EVH has been dealing with health issues and it’s part of the reason why their summer tour was shelved.

Lukather said, “I love Ed and Alex [Van Halen]; they’ve been friends of mine for 40 years. I’m still friends with Mike [Anthony]. I love all those guys. I’m Switzerland, man. I don’t get in the middle of all that.

“I look you right in the eye and say, listen, I’ve been in contact with Ed. We text all the time. I really can’t say much, man. I don’t wanna say anything.

“Everybody wants VAN HALEN back — nobody more than me, ’cause I still think they’re one of the greatest rock and roll bands of all time. Eddie changed the planet [with his guitar playing].

“Him and Alex are sitting there laying back and they’re waiting to see what happens next. I think they’re on a hiatus. There’s been some health issues that they’re dealing with and stuff like that. We’re older guys now, and to go on the road, and stuff like that, it requires a lot of extra effort in terms of as a human being.”

He also added, “All I’m gonna say is I don’t think there’s any drama issues that are keeping them from working right now. I’m not the guy to say anything. I love those brothers so much and we’ve always had a great relationship. I’m a big fan and also adore them as human beings.”

Earlier this year, there were rumors of a comeback tour with the classic lineup. In December, Roth hinted that they would play a few stadium dates. Michael Anthony also confirmed that he was approached by the management regarding the reunion.

So far, there’s been no official statement regarding Eddie Van Halen’s status.