Top 10 Most Underrated Bassists Of All Time! 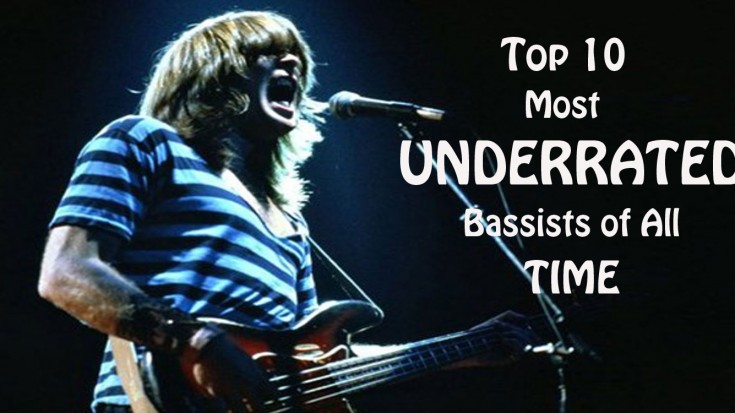 Quiet Riot, Ozzy Osbourne, Blue Öyster Cult, and Whitesnake are just four of many groups that this fine bassist has played the four string axe for. Rudy Sarzo can easily be defined as one of rock and metal’s most important assets. He is no stranger to being the foundation of some of the biggest acts in history. His charisma and untouchable technique also contribute to his legendary status.

Though he is all that and a bag of chips on the bass and has been a part of some of the most popular bands in history, why has always kept kitting virtual glass ceiling without breaking it. Well, a recurring theme you’ll see in this list is that being a bass player means you have to “hold down the fort” in the band, thus making it hard for him/her to be at the forefront of the show. Rudy Sarzo is probably the best example of this.

Rudy Sarzo had/has it all. The look, the technique, and the stage presence. This Cuban rock legend has every reason to be a Rock N’ Roll Hall of Famer. Though Strangely enough, he is not. Luckily for us, Rudy Sarzo is just getting started and is still in his prime. So we can bet that we’ll hear a lot more from him!

Judas Priest bassist Ian Hill has built a career by being consistent and excellent. He creates tension where needed and is the soul rhythm generator for the band and thus became the band’s true foundation. His is relatively well reserved and isn’t too flashy on stage, but just enough to put on a great show. He prides himself on not only putting on a great show, but by making the other band members look good as well.

So at this point it’s not really a surprise as to why Ian Hill is underrated. He chooses to be in the background most of the time. He knows how important it is to be the foundation of the band. Thus he is not always able to get the recognition her deserves.

Though Ian is not necessarily the flashy type on stage, he is definitely the most important member of the band, even if it not recognized by fans and critics alike. Still, it’s a true shame that even with all his contributions to the heavy metal scene, he is basically undervalued in the eyes of fans and critics alike. Fortunately for us though, he is still as willing as ever to rock the house down!

We Will Always Have Faith In Billy Gould!

Faith No More bassist Billy Gould could easily be the most prolific and innovative bassist of the early 90s. His gritty hard hitting style is the most important part of the band’s hit single Epic. He has arguably the most unique and rhythmic approach to accompanying a song. He certainly knows how to keep both his band and audience grooving.

So why hasn’t he soared to unimaginable heights with his bass playing? How come he’s not on the cover of every single guitar magazine? He certainly has the chops and the charisma. Well the answer is kinda simple, the band itself is to blame.

Faith No More has not always been the most consistently cohesive unit to ever grace the stage. They have had falling outs and disagreements amongst the members. However, they have recently put aside those differences and gotten back together, and what’s even better is that Billy has joined them! This is good news because the band certainly has gotten better with age. So we can have faith that they’ll deliver us amazing music!

Fingers As Fast As Lightning!

If you haven’t looked up “Billy Sheehan Bass Solo” on Youtube yet, do yourself a favor, stop what you’re doing and go look it up right now. Billy Sheehan is infamous for his shred like bass playing. He can literally play lead guitar on his bass guitar. He is innovative and a damn good showman. He is most known for playing with such acts as Mr. Big, Steve Vai, and David Lee Roth.

It’s definitely a mystery as to why Billy Sheehan never really became one of the best revered bassists in the world. He’s certainly one of the best. He deserves way more credit than he’s actually given.

He’ll Be Great Wherever He May Roam!

Back in the old days of Metallica, Jason Newstead had some big shoes after the tragic passing of Cliff Burton. Though he was constantly hazed throughout his early stages of his tenure, he did a more than swell job of picking up the rhythm for the band and taking them to mainstream stage. He was often the target of criticism because of who’s shoes he was filling.

It’s truly unfortunate that he was looked at as just simply being “Cliff’s replacement”, and though that is technically true, he has contributed way more than you think.

Jason was the bassist for Metallica when they were at their most popular. He was able to incorporate his own song writing into the band’s successful arsenal of hit songs. Jason Newstead is no longer with Metallica. He said he left because he wasn’t treated right. It’s a real shame that after all his hard work, he was still treated the way he was. Hopefully in the future, we can hear more great music from him.

He Can Play Bass AND Sing!

The revered bassist known as Glenn Hughes is one of the few responsible for starting the “singer/bassist” trend. He is still considered one of the best current bassists on the scene today. It was only inevitable that he would soon be inducted into the Rock N’ Roll Hall of Fame with full honors. Glenn not only has some of the best bass shops we’ve ever seen, but he has one of the most powerful voices you’ve ever heard!

It certainly wouldn’t catch anybody off guard if Glenn Hughes was suddenly named the greatest bassist of all time, because in many’s opinion, he is. Unfortunately though, he’s just not as revered as he should be. With his talent, it’s just mind baffling to think that this guy wasn’t inducted into the hall in some capacity several years ago.

Luckily for us though, he is not about to hang up the four-string axe any time soon. He still in great shape and is still very passionate about music. So we can expect to see him on stage for MANY years to come. Lucky us!

It gets pretty annoying when this man is just pushed to the side in a conversation of great bassists. He has worked tirelessly to provide great rhythmic structure to The Who. John can easily be defined by his prolific and innovative playing. He fits the description of a rock legend that EVERY bassist should take after.

There is a clear explanation as why he was never given the recognition he deserved is mainly because he he had to be the foundation of the band and essentially carry the band through their success.

To no one’s surprise though, he was inducted into the hall. All too late, but inducted nonetheless. John Entwistle is lightning fast with his fingers. He is a man amongst boys in regards to musicianship. Unfortunately, he is no longer with us, but his legacy lives on through his timeless music. We thank him for his mega contributions and influential playing!

The Thunder Of His Playing Will Strike You!

This Australian rock power house is the rhythm gate keeper for possibly the most rhythmically defined rock band of all time AC/DC. Aside from Angus Young, the boys from AC/DC are not the flashiest bunch of rockers. In fact, a whole listicle could be made about each member and how underrated he is, but since this is a listicle about bassists, we’ll talk about Cliff.

In my opinion, AC/DC is 60% foundation and 40% color. What that means is that the rhythm section of this band is is vital to their success, and who do we have do thank for that? Mr. Cliff Williams himself!

To sum it up, Cliff Williams never was really too flashy with his playing and always chose to be in the background of everything. Though this is his choice, it’s still unfortunate that he never really got his due for being as contributive as he was on stage. And what’s ever more is Cliff recently announced his retirement after their current tour. However, Cliff Williams will be the first to tell you that he has proven all that he needs to prove. Still, I think we can all agree that he should’ve been given his fair due.

The King Of Queens!

There’s a pretty famous song that’s been out for a while called Bohemian Rhapsody. During that iconic anthem towards the beginning, there’s a part where Freddie Mercury is playing piano and singing. During that part you’ll hear an iconic bass line that is used to strengthen the composition. There’s also another famous song called Under Pressure. The very song is DEFINED by its bass line. The person responsible for these astronomical feats, John Deacon.

The former bassist for Queen is arguably just one of the most underrated musicians of all time. He is responsible for some of music’s greatest moments and has been the foundation of one of the most revolutionary bands in the world.

John Deacon is now retired, and it’s unknown if he’ll ever take up music again, but we sure hope he does. And one thing’s for sure, we have no choice but to be grateful for his contributions to rock n roll!

His Music Builds Stairways To Heaven!

Simply put, John Paul Jones of Led Zeppelin is THE most underrated bassist of all time. People don’t ever really recognize just how good he actually is. It’s sorta become his shtick.

There’s actually an old myth as to why he is underrated. The myth is that Robert Plant, Jimmy Page, and John Bonham actually sold their souls to satan to become the best band ever. John Paul Jones wasn’t present for this ceremony. All of the other three went on to be amazingly revered musicians while John Paul Jones was kept in the background. Then as a result of their souls being sold, Jimmy Page got incredibly ill, Robert Plant lost his son, and John Bonham tragically passed away, while John Paul Jones is now still happy and healthy performing great music.

John Paul Jones is truly phenomenal on his bass guitar. He is the foundation of one of the most rhythmically defined rock ensembles in the world. Luckily for us he is still out there making music and has even said that another Led Zeppelin tour is never off the table. Join us in thanking John for just being so awesome!