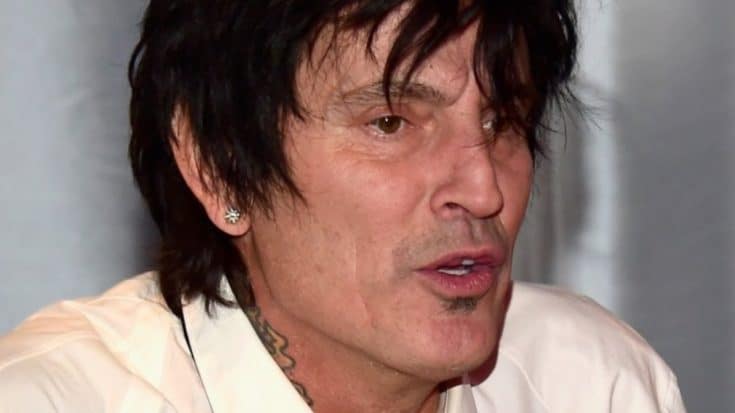 Mötley Crüe drummer Tommy Lee broke his four ribs prior to the launch of their The Stadium Tour on June 16 in Atlanta, Georgia. His wife Brittany Furlan recently revealed in a Snapchat video how it happened.

In the clip, she states:

“Everyone keeps asking how Tommy broke his ribs, so I’m just gonna tell you. We were staying at an old rental house in Nashville. It was a cool, old quirky house. But the stairs outside were made out of stones, and they were really uneven, and the roots were pushing them up from the tree. And everything was fine. I actually fell up the stairs a few times getting groceries, but whatever.

“So, the day that we were leaving Nashville, our driver came and we had all this luggage and he wasn’t helping us; he just stayed in the car. And so Tommy was trying to carry all of our luggage for us. And he fell down these crazy stairs and broke — broke — four ribs. Not fractured, not bruised — broke. And it was crazy, ’cause I came out and he couldn’t breathe. It was really scary.”

The couple got to their flight going to Pennsylvania and went to the hospital when they landed. Although, Lee has been told about his broken ribs, he continued to play on the first day of their tour, two weeks after the incident.

But after five songs into their set, Lee was forced to exit the stage due to the injury. Former Ozzy drummer Tommy Clufetos filled in behind the kit for the rest of the dates.

On their June 22 show at Nationals Park in Washington, Lee joked with the crowd:

“For the people that know, here’s a little fucking joke on the whole situation. For those of you that don’t know, I brought a couple of unbroken ribs for y’all to throw down on. Let’s fucking party, goddammit. Ribs? How about some fucking ribs?”

While on their June 25 performance at Citizens Bank Park in Philadelphia, Pennsylvania, Lee returned later in the night to play five more tracks in the set, including “The Dirt (Est. 1981),” “Dr. Feelgood” and “Home Sweet Home.”

Mötley Crüe’s The Stadium Tour with Def Leppard, Poison, and Joan Jett and the Blackhearts was originally planned for 2020 and later moved to 2021 and then to 2022. The North American trek will wrap on September 9 in Las Vegas, Nevada.