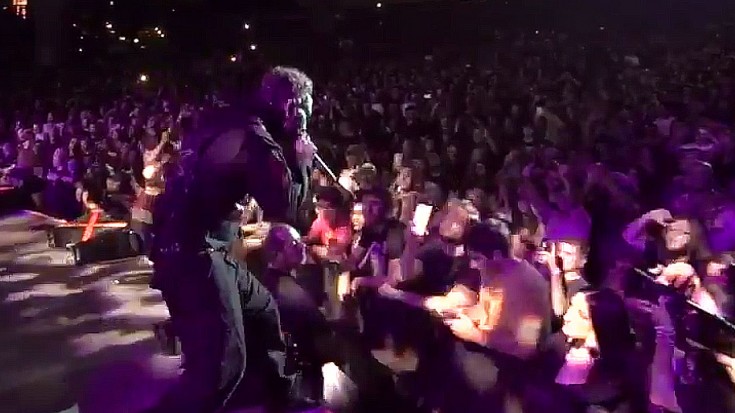 Remember the days of concert going – you know, the ones where everyone had a lighter in the air and was completely engrossed in the band they paid to see? We do, and we’re not the only ones pushing for a return to those days; where Apple is trying to come up with technology that would make it impossible to film or take photos at a band’s concert, there are people like Slipknot frontman Corey Taylor who are resorting to other – and more extreme – measures of getting fans to put the phone down and enjoy the show.

This weekend, the 42-year-old rocker came under fire for actually smacking the phone out of the hands of a fan standing in the front row; the fan, who can be seen texting with his head down in the video below, had no idea what hit him when the Slipknot frontman’s hand came down and knocked his phone to the ground below, breaking it. Unsurprisingly, he’s not sorry. In fact, he even took to Twitter first thing yesterday morning to explain his actions with 6 little words:

Wow. Pretty savage stuff. In an age where we’re all glued to our phones, are actions like this justified or completely out of line? Check out this video and don’t forget to sound off in the comments below!