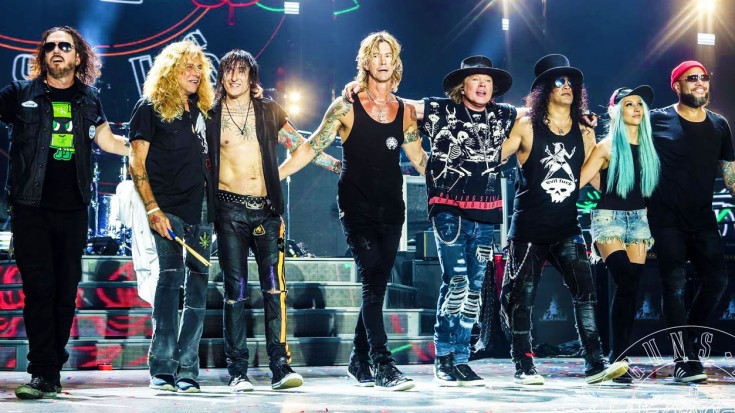 Introduced By Axl Rose As “My Brother”

Despite all the craziness going on in the world today, we can rest assured knowing that there’s one thing still very right with the world – and that’s Steven Adler with Guns N’ Roses. Joining his former bandmates for the second time in 26 years during this weekend’s show in Nashville, Steven is a man renewed; healthy, focused, and a stronger drummer than he’s ever been, he absolutely rocked Nashville when he appeared for “My Michelle” and “Out Ta Get Me” this weekend after a glowing introduction from Axl Rose, who brought a catch to more than a few throats when he announced Steven as “my brother,” almost as if to say that all really is forgiven.

After last week’s appearance in Cincinnati, fans figured that it was a one-off to appease Adler – who for years has been lobbying for a return to his Appetite For Destruction era band – but with two stellar shows under his belt, we’re left wondering if this is the prelude to Steven’s official return to Guns N’ Roses and if so, has this been the band’s plan all along? In any event, it’s a great feeling to see Guns N’ Roses getting along and killing it onstage night after night, for once remembering that it’s about the music and the bond these guys have shared for decades. We can’t wait to see what other fun surprises Guns N’ Roses have in store for us – welcome back, Steven!