This Is Not A Drill: Geddy Lee and Alex Lifeson Reunites In “South Park” 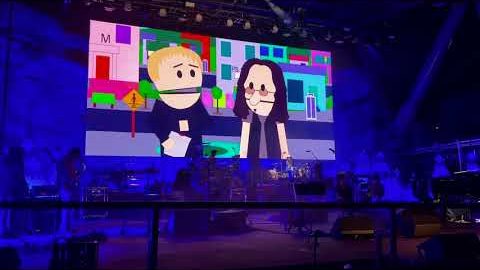 The infamous American animated sitcom South Park recently celebrated their 25th-year anniversary. The show is known for its profanity and dark, surreal humor that satirizes a wide range of topics toward an adult audience.

The celebration took place at the Red Rocks Amphitheater in Denver. The crowd were astounded by the performance of Geddy Lee and Alex Lifeson, former Rush members, who reunited on stage that night to deliver a performance of Rush’s classic track “Closer to the Heart.”

Rush appeared during 2011’s 15th season South Park episode “Royal Pudding,” in which the princess of Canada is abducted. Alongside was Primus, who also hit the stage while show creators Trey Parker and Matt Stone joined in too. It turned out to be a big moment for drummer Stone.

Primus frontman Les Claypool says his band and co-stars Ween decided to include “Closer to the Heart” in the previous night’s show some time ago, knowing in advance that Lee and Lifeson would be there for the second. He even convinced Stone to play the drums saying:

Approaching the end of the song, Claypool paused and told Stone to “play the greatest drum lick you ever played in your entire life right now!” Stone’s musical response was understandably muted, especially since Claypool reminded Stone who else was on stage.

Before the reunion happened, the crowd watched an animated scene in which Lee and Lifeson discussed being invited to take part in the anniversary performance, with Lifeson exaggerating his Canadian accent. The audience cheers increased as they saw the pair appear on stage and realized what was about to happen.

South Park: The 25th Anniversary Concert will air on Saturday Aug. 13 on Comedy Central, and then on Paramount+ a day later. Watch the full video below.