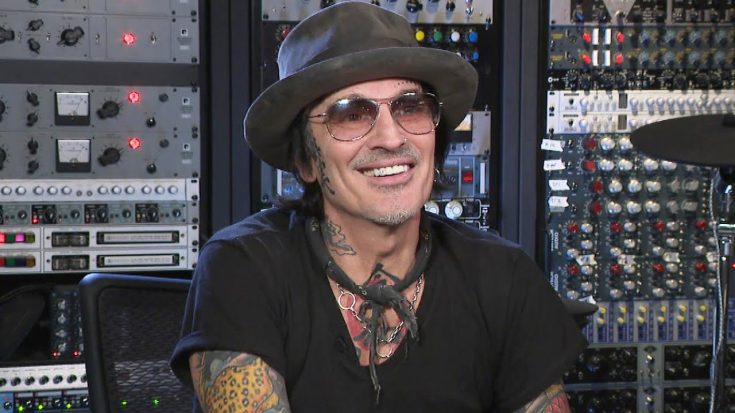 Today’s extremely large news about Tommy Lee is not about his music career, but rather about the Motley Crue drummer’s genitals uploaded to his social media account. It was not the first time it sparked discussion about the rocker’s penis.

Tommy’s jimmy has gotten worldwide attention once again after the rocker’s sex tape with Baywatch star Pamela Anderson became a pop culture sensation in the mid-’90s. People across the world stood in awe at the musician’s equipment, yes, not his drums.

At that time, an episode of MTV’s claymation series Celebrity Deathmatch even featured him fighting pornographic actor Ron Jeremy, with both characters shown in rooster outfits in what was dubbed a “celebrity cock fight.” But today, one doesn’t have to wait for TV writers to pen one-liners about Lee and his member.

The world is full of amateur comedians and social media gives them an easy apparatus to push their jokes to the masses. From memes to GIFs, photoshopped images to simple satire, the internet has been flooded with material as Lee and his phallus have once again gone viral.

Although some have suggested it could be a strange marketing plan for Hulu’s Pam and Tommy miniseries that is currently up for 10 Emmy awards, such a concept seems extremely far-fetched because Lee was not involved with the production in the first place.

The image was uploaded to Lee’s Twitter, Facebook and Instagram accounts. On two of those, the picture was accompanied with the caption “Ooooopppsss.” There has been no official word from Lee regarding the image, though he has since posted several jokes making light of the situation. Below are some of social media’s funniest reactions to the picture.

not even 10am and i've said the words "tommy lee's dick" like 25 times. happy friday

tommy lee getting his chopper out on IG wasn’t on the 2022 bingo card, but here we are

How old are you?

So, when Tommy Lee exposes his penis on the internet, he's a rock star and incredible! But when I do it, I'm asked to "leave this KFC immediately, I'm calling the police"?!

If I had a nickel for every time in my life the world went nuts over tommy lee's hog, I'd have two nickels. Which isn't a lot but it's weird that it's happened twice.

Me opening up Instagram at 3am to Tommy Lee posting a whole dick pic#TommyLee pic.twitter.com/0zVyyux2CB

opening instagram only to be greeted by the cock of Tommy Lee pic.twitter.com/ngM2ExyOcv

I thought this was another pic from Tommy Lee https://t.co/OEKnHFOpl1