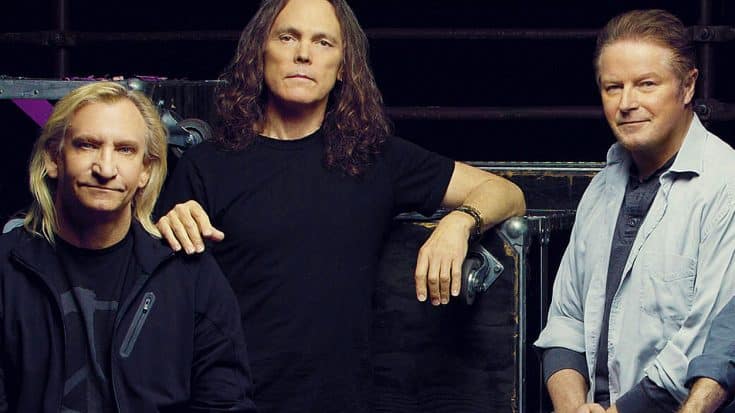 ‘Sworn To Secrecy’ Ahead Of Band’s Upcoming Shows

After four decades together, the Eagles are no strangers to hitting major career milestones, but nothing could have prepared them for the one they’re about to reach this summer. Last January saw the death of Eagles frontman and founder Glenn Frey and understandably, his passing threw his surviving bandmates into a tailspin. Against all odds, however, a surprise announcement last month revealed that not only are the Eagles alive and well, they’re about to take on the monumental task of headlining two brand new music festivals this summer alongside Fleetwood Mac, Journey, The Doobie Brothers and Steely Dan – without Glenn.

With only weeks to go until Classic East and Classic West take place in New York and Los Angeles respectively, there’s just one question on everyone’s lips: who will fill in for Glenn Frey? Longtime friend Jackson Browne? Or wait – maybe Glenn’s own son, Deacon? We don’t know yet, but at least one man does; bassist Timothy B. Schmit refused to let the cat out of the bag during an interview with Cleveland’s Plain Dealer, revealing that he knows exactly who the Eagles have tapped for fill in for Glenn those two shows.

Strangely enough, we kind of like it that way. Sure, we’d love to know who the man of the hour is – who wouldn’t? But there’s something comforting about knowing that the Eagles have put enough thought into who they chose to join them at Classic East and Classic West that they can’t wait to see the looks on all of our faces when we realize who’s standing onstage with them. Whoever it is, we’re sure they’ll be great and more importantly, someone that Glenn himself would have loved!