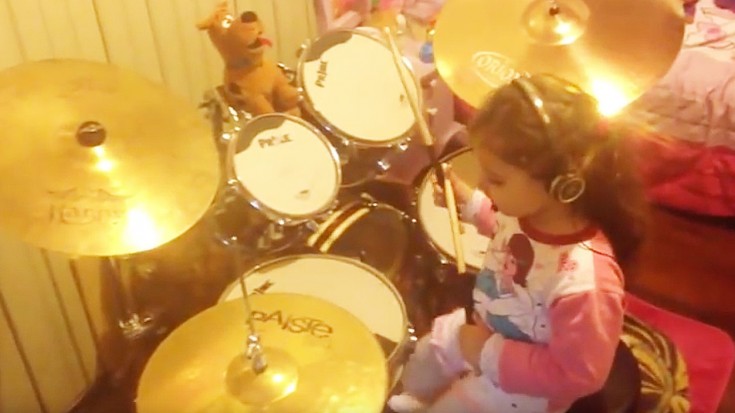 Meet Eduarda Henkein, just 4 years old and already has the greatest taste in music possible. Performing an impressive cover of Pink Floyd’s “Hey You,” Eduarda rips the crap out of Mason’s drum work; all the while her walls and room scream Barbie.

Interesting Quote: “It’s about the break-up of my first marriage, all that misery and pain and being out on the road when the woman declares over the phone that she’s fallen in love with somebody else. It’s a complete disaster, especially if you’re someone like I was. I was flotsam on the turgid seas of women’s power (laughs). Hopeless, really, I could do nothing but go fetal and weep. But the song is also partly an attempt to make connections with other people, to say that maybe if we act in consort, some of the bad feelings will go away.” – Roger Waters

From album The Wall, “Hey You” functions as an ongoing longing for human contact, placing people in desperate situations that require some type of aid in emotional and physical forms. Granted Eduarda cannot grasp the depth and complexity of this song at her age, but just knowing the song and possessing the sheer interest in it is enough to impress us.

With expert playing at just age 4, Eduarda keeps on beat with one of the greatest drummers of all time and it will make your day.