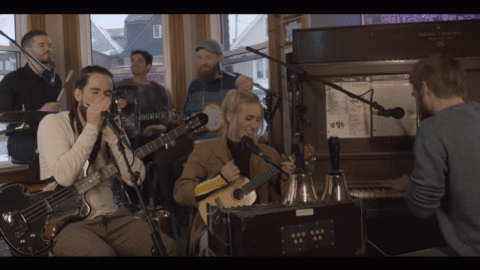 via Walk off the Earth/YouTube

From 1962 to 1970, The Beatles managed to make their mark in rock with a dozen albums and countless classic hits. They didn’t just provide the soundtrack of our lives but they also became the voice of a generation. Even before they released their debut album “Please Please Me”, they’ve already been playing in clubs and so when it was time to record the LP, all they needed was a long studio session to finish the tracks.

The Fab Four were clearly a tight unit. Musically and lyrically, their work remains unparalleled. And so Canadian indie pop band Walk Off The Earth decided to cover 20 of their best songs in less than seven minutes. They were catapulted to stardom with their stellar renditions of popular tunes.

We won’t spoil anything for you but let’s just say first that the transitions are something else.

WOTE member Joel Cassady told Outline UK, “Covering music you like, and that inspires you, is always a good way to elevate your music in front of people you don’t know. It gives them something to listen to that they’ve already heard, rather than your own music. We did it that way, via YouTube to allow people to hear the style that we have, because we put a bit of Walk Off The Earth in every cover we do as well.”