Their First Interview In Years, Axl And Duff Reveal The Truth Behind Izzy Stradlin’s Absence 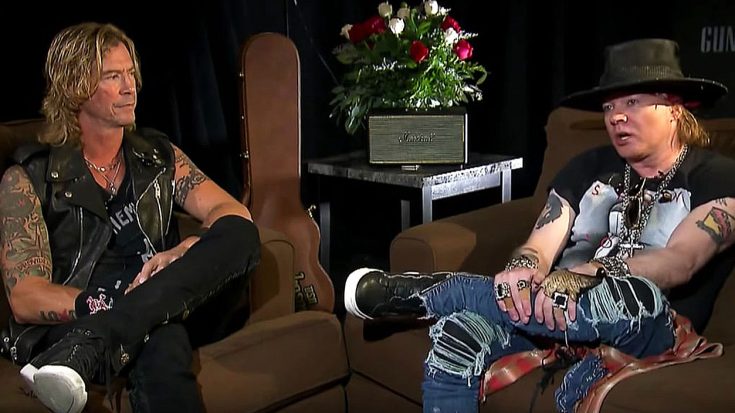 It’s been a year of many firsts for Los Angeles rock legends Guns N’ Roses, and this holiday weekend saw them cross yet another threshold as Axl Rose and Duff McKagan sat down for their first interview since Guns n’ Roses’ unlikely reunion. Two weeks off of their critically acclaimed Not In This Lifetime Tour, Duff and Axl sat down with Brazil’s Globo TV for a lengthy 15 minute long interview that touched on some of the most critical parts of the tour – how Slash and Axl managed to bury the hatchet, how a band like Guns N’ Roses changed the landscape of rock and roll and the one question that’s been burning in the minds of fans since the whole thing kicked off, “What’s the real reason behind Izzy Stradlin’s absence?”

Sure, we’d have loved to have seen former drummer Steven Adler dominating the entire tour rather than the handful of shows at the middle of the tour, but with the 51-year-old’s back surgery at the start of the year, a full 32 date tour followed by major stints in South America, Australia and Japan wasn’t particularly safe, wise, or realistic. The issue with Izzy Stradlin, however, boils down to one fact: no one, not even Axl, really knows why he won’t rejoin his bandmates.

“I don’t really know what to say about Izzy. It’s like you could have a conversation and think it’s one way and the next day it’s another way,” Rose said.

“And I’m not trying to take any shots at Izzy. It’s just his thing is kind of his thing, whatever that is.”

At the end of the day, it looks like Izzy’s comes down to just a very real desire to not want to rehash the past and pursue his own career on his own terms. His bandmates aren’t the most optimistic that Izzy will come around any time soon, but hey – this is also the same band who swore that fans would never see a classic lineup reunion, at least ‘Not in this lifetime,’ that is.