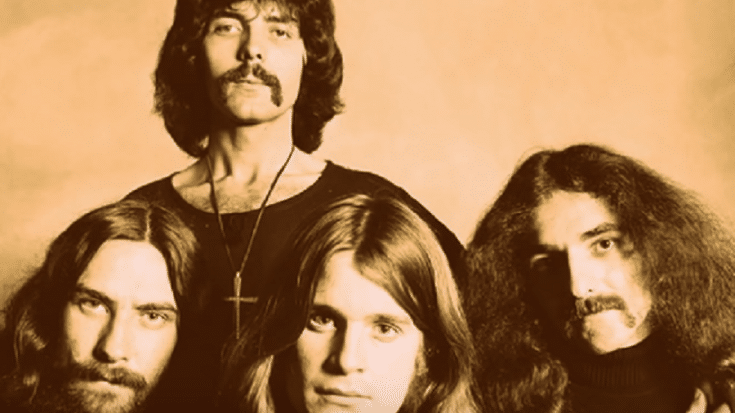 Being in a rock ‘n roll band is hard enough – there are drugs and alcohol everywhere to fuel your craziness. And that’s basically what happened with Black Sabbath in their heyday but as you will soon find out, most of these insane stories on this list involve or are perpetrated by the one and only Prince of Darkness Ozzy Osbourne. But that isn’t to say the rest of the group didn’t have their share of excesses and debauchery.

Here are some of their wildest antics.

9. Black Sabbath attracted occultists and satanists who asked them to participate in their rituals. They even showed up in their hotel rooms!

“I couldn’t believe it when I learned that people actually ‘practiced [sic] the occult.’ These freaks with white make-up and black robes would come up to us after our gigs and invite us to black masses at Highgate Cemetery in London. I’d say to them, ‘Look, mate, the only evil spirits I’m interested in are called whisky, vodka, and gin.’

At one point we were invited by a group of Satanists to play at Stonehenge. We told them to f*ck off, so they said they’d put a curse on us. Britain even had a ‘chief witch’ in those days… Mind you, we did buy a Ouija board once and have a little seance. We scared the shit out of each other.”

8. Geezer Butler almost jumped out a window during an acid trip.

Someone spiked his drink with LSD. And he said:

“Tony and Bill had to hold me down on the bed. I started going off drugs after that.”

7. They rented a haunted castle for Sabbath Bloody Sabbath where weird things happened.

They saw ghosts – enough to frighten Ward into sleeping with a dagger. Osbourne also almost burned the whole place down when he slept and “a piece of coal tumbled onto the carpet” which set the entire room ablaze.

6. Tony Iommi “almost puked” after seeing pus coming out of a groupie.

Osbourne talked about it in his autobiography:

“When it was time to go back to England, were were all terrified of taking home an STD from one of the groupies and giving it to our other half. Catching some exotic diseases was always a big worry when we were in America. I remember one time during a particularly wild night at a hotel somewhere, Tony came running out of his room going, ‘Aargh! My knob!My knob!’ I asked him what was wrong, and he told me that he’d been messing around with this groupie when he looked down and saw all this yellow pus coming out of her. He thought he was about to die.

‘Did the pus smell funny?’ I asked him.

5. They had so much coke during the recording of Vol. 4 that even their dog got sick.

Their cocaine were stored in large speaker boxes. The doberman in the Bel Air mansion they rented found some of the drugs and got ill because of it. According to bassist Geezer Butler:

“Half the budget went on the coke and the other half went to seeing how long we could stay in the studio.”

The working title of the album was actually Snowblind, another track which was a clear reference to cocaine. They even thanked “the great COKE-cola” in the liner notes!

It happened while recording Vol 4. They were both peeing side-by-side when Osbourne thought it would be hilarious to spray him with an aerosol he found in the area. Ward said in one interview:

“There was one point where Ozzy had spray-painted my private parts. And then I read on the spray paint it was poisonous and do not apply to the skin, so in fear of my private parts, I panicked and went kind of crazy.”

Iommi liked playing practical jokes on Ward. More than once, he asked Ward if he could set him on fire. So when Ward said Yes, Iommi proceeded to do just that. He recounts:

“I tipped rubbing alcohol over him. Normally it just burned off, but this time it soaked into his clothes, so when I lit it he went up like a bomb.

“He was rolling on the floor, shouting and screaming. I thought it was part of the joke so I poured more stuff on him.”

2. Ozzy Osbourne pooped in an elevator in full view of people in the reception area.

Remember when Tommy Lee told the story of how he stopped Osbourne from pooping in an elevator so the Black Sabbath frontman waited until they got to the hotel room and did his thing on the floor instead? Then, Osbourne apparently ‘painted’ the walls with his poop? Yeah well, another time, another story.

Iommi said in one interview:

“We were all in an elevator in this real plush hotel, and Ozzy decides to take a crap. As he’s doing it, the elevator is going down to the reception floor. The door opens suddenly — and there’s Ozzy with his pants around his knees. And all these people in fur coats are just staring at him with their mouths open.”

1. Ozzy Osbourne accidentally alerted the cops so he hurriedly finished all the drugs before they came.

“One day, I’d just done a line and was feeling really hot. I pressed this button on the wall thinking it was the air conditioner – instead, it alerted the police! All these cop cars show up, so I go into the toilet with all the drugs, trying to do them all before they came in!”