The Top 10 Most Underrated Classic Rock Singers Of All Time – See Who Made the Cut! 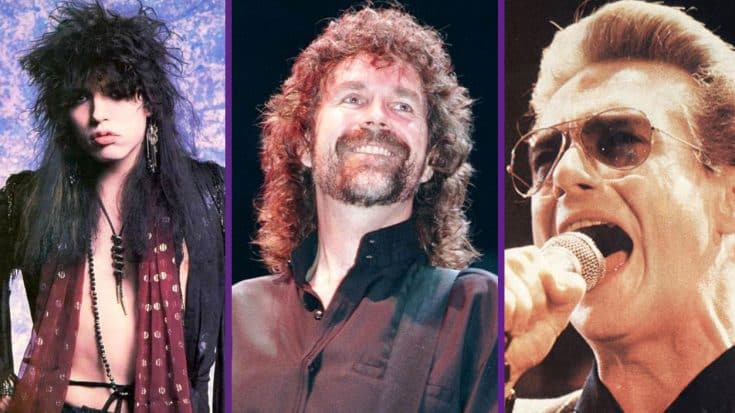 This is a man who literally damaged his own voice for his craft. Tom Keifer, front man for Cinderella, became infamous on the 80s hair metal scene for his deceptive clam image which was paired with his aggressive and prolific rock/metal vocal style. Early in his career, Tom quickly became one of the greatest rock front men of all time with an unmistakable voice and charisma that is often imitated; yet never duplicated.

Unfortunately, some time into his career, he started vocal chord problems. Tom underwent several operations to repair a paralyzed left vocal chord. If you’ve ever listened to him sing then you’ll know of his aggressive singing style that could be very damaging to any singer.

Luckily he has overcome his vocal problems and is still singing as greatly as ever, today. Though this is the case, he remains one of the most underrated rock singers of all time never truly getting the recognition he deserves for his immense contribution to rock music.

A Hero To Us All!

One of the ongoing arguments in the classic rock community is the origin of hard rock and heavy metal. As far as heavy metal is concerned, many fans will agree that Black Sabbath essentially engineered what we call “Heavy Metal”. Rock and roll, however, is a more complex and in depth argument. There is a countless amount of bands that can be said to be the founding fathers of rock music. One of those bands is a band called Cream.

Being one of the first bands to introduce the hard rock sound that we as fans crave day in and day out, Cream are not always credited for their contributions to rock music, but their contributions are certainly there, and the lack of recognition doesn’t stop with the band. It extends to vocalist/bassist Jack Bruce.

With a soulful voice and charisma to follow, Jack Bruce is undoubtedly one of the greatest rock vocalists to be at the forefront of the creation of rock music. He is also one of the most underrated, which is a shame.

Chances are that you already know Dee Snider for being an outspoken activist and for the infamous testimony he gave in 1985 to the PMRC. And, yes, you are probably aware that he is the front man for Twisted Sister, but for the most part, that seems to be the extent of the knowledge that people have of Dee Snider, which is rather sad.

Dee Snider is not only remarkably famous for his showmanship and charisma, but also for his singing. Dee Snider has often been compared to Roger Daltrey as they share the same high octave yet heavy sounding vocal style. Even at 61 years old, Dee Snider can still just as good if not better than he could in the 80s.

It’s truly a shame that Dee Snider does not get any recognition for his incredible singing. He is one of the best pure and simple and should be recognized for that!

The Man, The Myth, The Legend!

The fact that anything having to do with Rush can be deemed “underrated” in any way is rather unbelievable in of itself, but it’s the truth. Front man/bassist Geddy Lee is not the only thing about Rush that is underrated, but it probably is the most shocking. Geddy Lee has a singing voice that is the stuff of legend. His razor sharp falsetto and crystal clear enunciation of every word he sings sets him apart as one of the most unique and distinctive singers in all of rock and roll.

His lack of recognition for his singing abilities is criminal. He is an impeccably great musician, and an even better singer.

Him and his band Rush are revered as rock legends and are considered heroes amongst the hard rock community. Geddy Lee is truly underrated, and it’s a shame!

I’ll honestly be surprised if you’ve heard of this man. He has sung for such bands as Rainbow, The Michael Schenker Group, and Alcatrazz among many, many others. Surprisingly, he is rarely ever talked about and likes to keep it that way. His name is Graham Bonnet.

At first glance you wouldn’t guess that this man is one of the most prolific rock singers of all time, but as soon as he would start singing, he would proceed to blow your mind. He has a loud and confident voice that sounds like it’s been refined for years (because it has been), yet he sings so effortlessly he makes it looks like anyone could do it. He is arguably rock music’s greatest utility player.

The truth is that where most singers found themselves in a situation where they couldn’t sing, Graham Bonnet would step in. He is considered the essential safety valve, yet he is underrated. Shame.

At this point, you’re probably noticing a trend here. Most of the singers on this list are also singers/guitarists and/or singers/bassists. Brad Delp is no exception. As a front man for one of the greatest feel-good rock bands of all time Boston, Brad Delp embodies falsetto, dynamics, and stage presence.

He’s the kind of singer that maybe isn’t the best showman, or doesn’t have the best vocal range, yet is still the best at all of it, if that makes sense. Brad Delp was arguably the most graceful rock singer of his time and could front a band with perfection even on his worst day.

Unfortunately, in 2007, Brad Delp committed suicide as a result of severe depression. Brad Delp truly had one of the greatest voices and was simply just one of the most charming guys in all of rock and roll. It’s a true shame that he consistently goes unrecognized. RIP Brad Delp.

A Voice As Powerful As His Bass Playing!

He has proven to be one of the greatest things about rock and roll and still sings just as good (if not better) as when he did during his early years. Again, being a bassist/vocalist, it tends to split the focus between the bass playing and the singing, and while his bass playing is absolutely stellar, this is a singer’s list.

Glenn Hughes is criminally underrated for his impeccable singing. Luckily, after years of hard work and amazing music, he has finally been given the prestigious honor of being inducted into The Rock & Roll Hall Of Fame alongside his Deep Purple brothers.

It’s very rare that a rock and roll singer will sound just as good as they did 48 years ago. Don Brewer is one of those rare examples. Being not only a great singer, but also a great drummer is also a rare thing. Bands often don’t let the drummer take a lot of the singing duties, but if you’ve EVER heard Don Brewer sing, it’s easy to see why Grand Funk Railroad did so.

Don Brewer is part of a band that is not necessarily underrated. Even the man himself may not be underrated as a musician, but he is certainly underrated as a singer. I’ll put it this way, if you go and see Don Brewer live, or even all of Grand Funk Railroad for that matter, you’ll agree that they sound basically identical to how they did in 1969. Don Brewer singing sounds just as vibrant and young as it did almost 50 years

Don Brewer still remains one of the most underrated singers in all of rock and roll, which is unacceptable.

First of all, please don’t hurt my family. Second of all, yes, his singing is EXTREMELY underrated. Joe Walsh, member of one of the most iconic rock bands ever, The Eagles, Joe Walsh is admittedly one of the most well regarded musicians of all time, yet surprisingly he is strangely underrated as a singer.

Joe Walsh has a singing voice that could not only front just about any rock band, but in some cases could front a metal band. Even today his voice has become increasingly powerful and has a richness that is not necessarily rare, but is truly perfected by Joe Walsh.

One Of The Best, Pure And Simple!

If I were to try and list all of Ronnie James Dio’s accomplishments here, we’d be here all day. This man is admittedly a metal legend, but in the grand scheme of things, he is unjustly underrated.

Even at just 5 foot 4 inches, Ronnie James Dio has a singing style a stage presence that that made him look like a giant. His singing progressively better as his career progressed and he did what no one thought was even possible. He joined Black Sabbath and made them and even better band than they were before, which seems crazy, but it’s true.

He is one of the greatest singers to ever stand in front of a microphone and it’s pure criminal that he’s not in The Rock & Roll Hall Of Fame! And that is what ranks him as THE most underrated rock singer of all time!

Do you agree with this list? Who do YOU think is an underrated singer? Let us know in the comments!