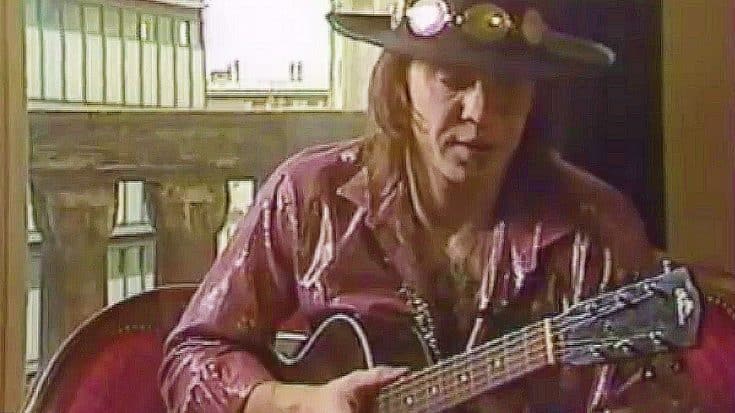 At this point, we’re convinced that there’s nothing Stevie Ray Vaughan couldn’t do when he had a guitar in his hands, and I think that’s what makes his August 27, 1990 death at the age of 35 so tragic. With just 7 years on the world stage, Stevie didn’t have enough time to show us what else he was capable of as his sobriety revealed a musician even more fiercely gifted than we could have imagined; we were ultimately robbed of the pleasure and privilege of watching Stevie’s talent evolve and this recently surfaced video from 1983 does nothing but further prove that.

Shown in a hotel room giving an interview about his then 16 years of professional playing, Stevie cradles a weathered acoustic guitar in his hands before launching into a bluesy acoustic jam session and to be entirely honest it’s not even what Stevie’s playing that blows us away – it’s the fact that even with just an acoustic guitar and missing any effects or pedals he might have used onstage or in studio, there’s no mistaking that gorgeous sound and tone unique to Stevie Ray Vaughan.

Fun Fact: In spite of a short-lived mainstream career spanning several years, Vaughan is widely considered one of the most influential electric guitarists in the history of music, and one of the most important figures in the revival of blues in the 1980s.