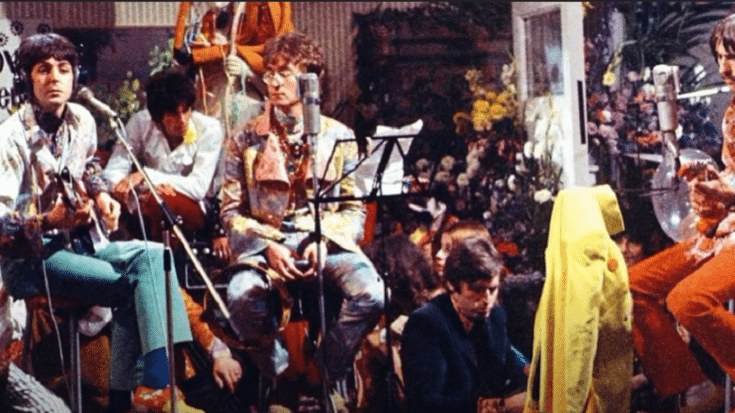 via You Can't Unhear This/YouTube

“All You Need is Love” was released in July 1967 as a non-album single. Written by John Lennon, it was featured on the live global television link “Our World.” Broadcasted via satellite in 25 countries, The Beatles sang to an audience of over 400 million.

They didn’t perform the entire song live, which was fairly common at the time. Instead, they played to a pre-recorded backing track.

According to Paul McCartney, “‘All You Need Is Love’ was John’s song. I threw in a few ideas, as did the other members of the group, but it was largely ad libs like singing ‘She Loves You’ or ‘Greensleeves’ or silly things at the end and we made those up on the spot.”

Musically, it’s complex and unusual especially since it’s in a rare 7/4 tempo. Nevertheless, it was a huge hit. It topped the charts in several countries.

Over the years, there have been debates about whether John Lennon or Paul McCartney was the one who sang the callback to “She Loves You” towards the end. One YouTube channel called “You Can’t Unhear This” decided to investigate this matter and settle it once and for all. Check out what he found out during his investigation.