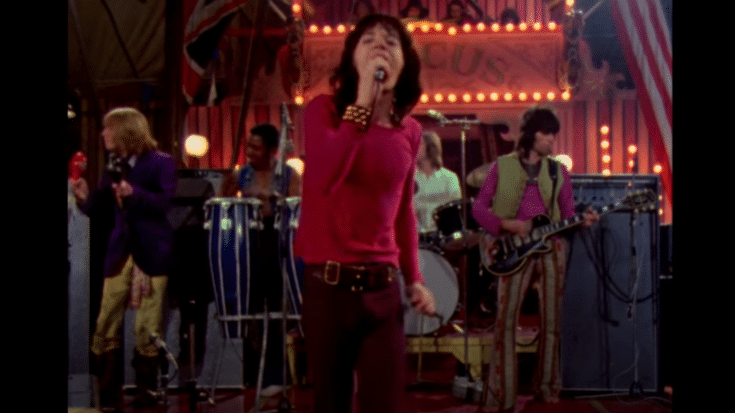 On December 12, 1968 – just six days after “Beggars Banquet” was released, The Rolling Stones performed “Sympathy for the Devil” in London along with their five other classics. It marked the final public performance of the band’s original lineup – Mick Jagger, Keith Richards, Bill Wyman, Charlie Watts, and Brian Jones.

Initially planned as a BBC-TV special but wasn’t aired following Jones’ departure and untimely death, The Rock and Roll Circus also featured performances by The Who, Jethro Tull, Taj Mahal, Marianne Faithfull, Yoko Ono, and The Dirty Mac (composed of Eric Clapton, Keith Richards, Mitch Mitchell, and John Lennon). Directed by Michael Lindsey-Hogg, the concert film wasn’t officially released until almost three decades later, in 1996. And the clip below didn’t make it to the final cut.

According to Richards, it took them around 36 hours to complete shooting. He said in a statement, “I remember not remembering everything toward the end, but it was fun. We went through two audiences…wore one out…it was great!”

Check out John Lennon enjoying the performance at the 4:54 mark.

Lennon later recalled, “The first time I performed without The Beatles for years was the Rock And Roll Circus, and it was great to be on stage with Eric and Keith Richards and a different noise coming out behind me, even though I was still singing and playing the same style. I thought: ‘Wow! It’s fun with other people’.”