The Story Behind “Summer’s End” From John Prine 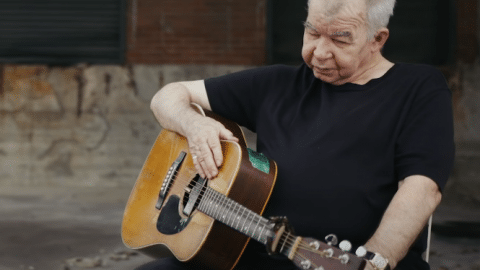 Singer-songwriter John Prine left us with a beautiful song “Summer’s End” included on his last studio album The Tree of Forgiveness in 2018.

The song starts with an idea of a summer vacation ending with ‘swimsuits drying’ and suddenly having the feeling of coldness with how the season changes and time passing by so fast that you ‘can see it’s snowing’ and when the chorus comes you’re all alone and longing for someone you love to come home.

“There’s a natural sadness with that song because I do think about me and John,” his wife Fiona said in 2018. “I think, ‘OK, we have had two seasons together, and we are going into the third season.’”

“Valentines break hearts and minds at random / that ol’ Easter egg ain’t got a leg to stand on / well I can see that you can’t win for trying / and New Year’s Eve is bound to leave you crying.”

The next verse makes you look back at precious moments in every holiday that goes by and realizing that all good things come to an end.

While the lyrics are poetic, the official music video for “Summer’s End” talks about a deeper issue.

Recovery Boys’ directors Kerrin Sheldon and Elaine McMillion Sheldon created the visual like they do their documentary work tackling substance abuse. The video shows a grandfather and granddaughter coming to terms with the loss of their daughter and mother followed by a brief flash of a TV report about the opioid crisis.

It was dedicated to “Max,” the son of Nashville Mayor Megan Barry, who died in 2017 due to a combination of drugs, including opioids. Prine considered Max a part of his extended family and performed at his memorial.

In a press release upon the video release, John Prine wrote:

“The opioid crisis is tearing American families apart. I love what Elaine and Kerrin have done with my song for this video. I hope a lot of people see it.”

“Summer’s End” was nominated for Best American Roots Song at the 60th annual Grammy Awards and was honored by American Songwriter as the Best Song of 2018.

“The moon and stars hang out in bars just talkin’ / I still love that picture of us walkin’ / just like that ol’ house we thought was haunted / summer’s end came faster than we wanted.”