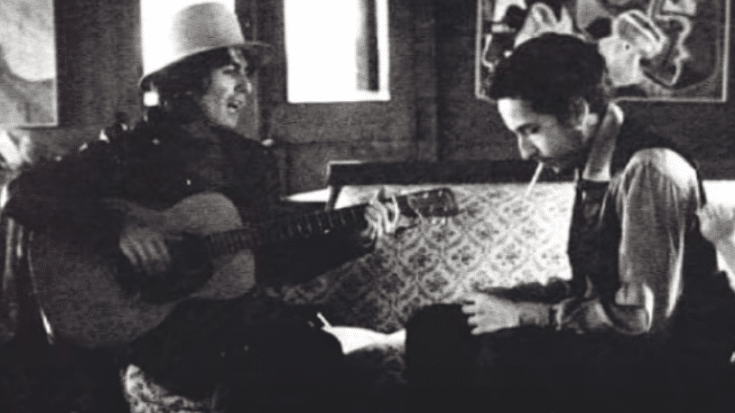 “I’d Have You Anytime” a song by George Harrison which he wrote with Bob Dylan has a nice story to tell.

In November 20 1968, George and Dylan wrote the song four years beyond their initial meeting. But George didn’t record it until 1970 for his first post-Beatles solo album, All Things Must Pass. George chose “I’d Have You Anytime” as the opening song for his album that tracks are almost all of which were written when he was in The Beatles.

It all started when George identified the chords. Before then Dylan had little knowledge of major-seventh chords, which seemed more unusual before, but after all these years, since The Beatles and others used them extensively, it became popular.

“Bob was saying, ‘Hey, what about those? Show me some of them chords, those weird chords!’ and that’s how that came about. It’s like a strange chord, really, it’s called G major 7th, and the song has got all these major-7th chords [laughs], so we just kind of turned it into a song. It’s really nice.”

In 2011, George’s wife Olivia wrote a beautiful book of memories and more about their life together, Living in the Material World. In the book she says that this song starts with George speaking directly to Dylan,

“He was talking directly to Bob because he’d seen Bob, and then he’d seen Bob another time and he didn’t seem as open. And so, that was his way of saying, ‘Let me in here / Let me into your heart.’ And he was very unabashed, and romantic about it, in a sense. You know, I found that he had these love relationships with his friends. He loved them.”

Harrison included another Dylan song “If Not For You” on the album, which Dylan included on his album New Morning as well and was later a hit for Olivia Newton-John.

In 1988, along with Jeff Lynne, Roy Orbison, and Tom Petty, Dylan and Harrison worked together as The Traveling Wilburys. Harrison’s pseudonym was Nelson Wilbury and Dylan’s was Lucky Wilbury.