Bono Is “Embarrassed” With His Voice On Early U2 Songs 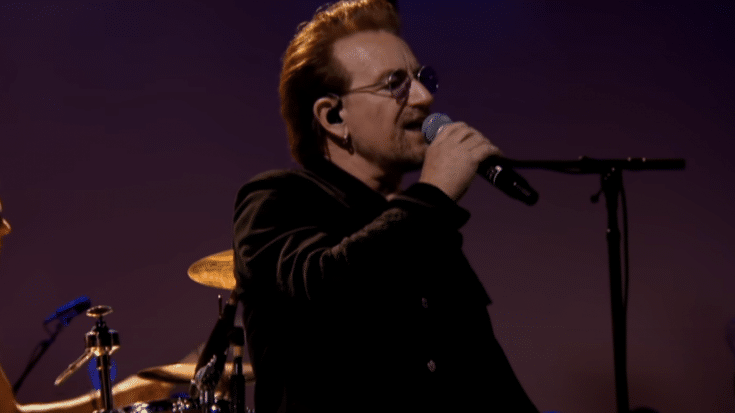 After 44 years of being in a legendary band U2, vocalist Bono seems like he still hasn’t found his sound yet and has regrets with the band’s name.

In an interview with The Hollywood Reporter’s “Awards Chatter” podcast, alongside U2’s lead guitarist The Edge, the Irish singer revealed that he has never liked their name,

“I still don’t. I really don’t. I was late into some kind of dyslexia — I didn’t realize that The Beatles was a bad pun either.”

“In our head it was like the spy plane, U-boat, it was futuristic – as it turned out to imply this kind of acquiescence, no I don’t like that name. I still don’t really like the name.”

And confessed, “Paul McGuinness, our first manager, did say, ‘Look, it’s a great name, it’s going to look good on a T-shirt, a letter and a number’.”

Then Bono continued talking about the start of U2:

“That’s the thing: We didn’t know enough about music. We were making it up. When you don’t have music theory at that level, you write your own.”

“We knew we’d be playing these songs in front of an audience, so the songs were written for the stage more than they were written for the radio,” guitarist The Edge chimed in, “In a small venue, to generate that kind of energy and excitement, it relies on everyone to be kind of fully committed, to be at a 10, and what that meant for Bono was probably singing at the top of his range more often than he would if we’d learned to write songs in a comfortable living room.”

When asked why he finds 1980 debut LP, Boy difficult to listen to, Bono replied:

“It’s the voice. The band sound incredible, though I just found the voice very strained and kind of not macho, and my Irish macho was kind of strained by that.”

“I’ve been in a car when one of our songs has come on the radio and I’ve been the color of… scarlet.” and added, “I’m just embarrassed. And yeah, I do think U2 pushes out the boat on embarrassment quite a lot. And maybe that’s the place to be as an artist, is right at the edge of your level of pain, for embarrassment, your level of embarrassment. And the lyrics as well. I feel that on Boy and other albums, it was sketched out, very unique and original material. But I don’t think I filled in the details.”

Bono shares that he feels like he “only became a singer recently” and that “maybe it hasn’t happened yet for some people’s ears.”