The Story Behind “Strawberry Fields Forever” By The Beatles 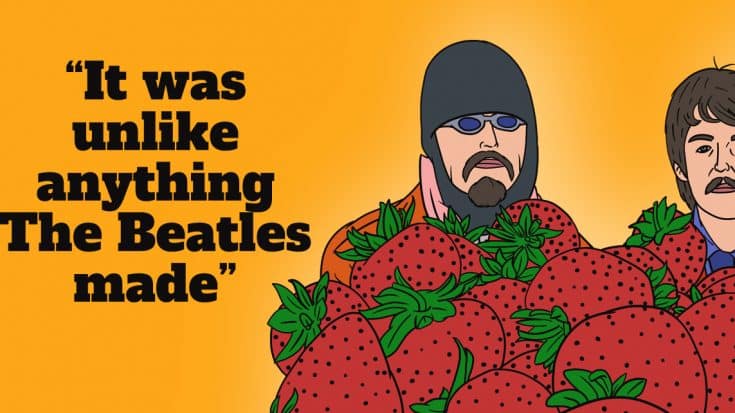 Written by John Lennon but credited under Lennon-McCartney, “Strawberry Fields Forever” was released in 1967 as a double A-side single with “Penny Lane”. It was unlike anything The Beatles had churned out at the time which somewhat alienated some of their fans. But it became influential in the then-emerging psychedelic genre. And their promotional film became integral in the evolution of music videos.

It’s the first song they recorded after completing the masterpiece “Revolver” and they initially planned on including it on “Sgt. Pepper’s Lonely Hearts Club Band” but it was their record company who pressured them into releasing it as a single.

John Lennon once described this track as a “psychoanalysis set to music.” He wrote it in the autumn of 1966 in Almerí­a, Spain while he was filming for the 1967 British black comedy movie “How I Won The War” and playing the role of Musketeer Gripweed. It took him six weeks to write it, mostly while he was hanging around.

The song is a look back at his childhood – Strawberry Field was a Salvation Army children’s home near his childhood home. Paul McCartney knew the place too saying, “I’ve seen Strawberry Field described as a dull, grimy place next door to him that John imagined to be a beautiful place, but in the summer it wasn’t dull and grimy at all: it was a secret garden. John’s memory of it wasn’t to do with the fact that it was a Salvation Army home; that was up at the house. There was a wall you could bunk over and it was a rather wild garden, it wasn’t manicured at all, so it was easy to hide in.”

Lennon often roamed around with his friends Pete Shotton and Ivan Vaughan, and they sold lemonade bottles. And he mostly looked forward to the garden party every summer. But of course, the song wasn’t ALL about nostalgia especially because LSD became part of the equation. The lyrics also reflected Lennon’s troubled side, highlighting his self-doubt.

He explained, “The second line [sic] goes, ‘No one I think is in my tree.’ Well, what I was trying to say in that line is ‘Nobody seems to be as hip as me, therefore I must be crazy or a genius.’ It’s the same problem as I had when I was five: ‘There is something wrong with me because I seem to see things other people don’t see. Am I crazy, or am I a genius?’ … What I’m saying, in my insecure way, is ‘Nobody seems to understand where I’m coming from. I seem to see things in a different way from most people.’”

In the middle of November, Lennon recorded some solo demos at his home in Weybridge, Surrey. And during the recording sessions, they used a Mellotron which was still fairly new at the time. It was The Moody Blues’ Mike Pinder who introduced it to them back in 1965. Engineer Jerry Boys recalled that The Fab Four “used it in a way nobody had ever thought of.”

It was a complicated recording and The Beatles had to record it over eight dates.

Lennon admitted he considered this as his finest work with the group and in fact, after his tragic death, a part of New York’s Central Park was named after “Strawberry Fields Forever” and widow Yoko Ono donated $375,000 to the home. He also revealed that this is “one of the few true songs I ever wrote… They were the ones I really wrote from experience and not projecting myself into a situation and writing a nice story about it.”