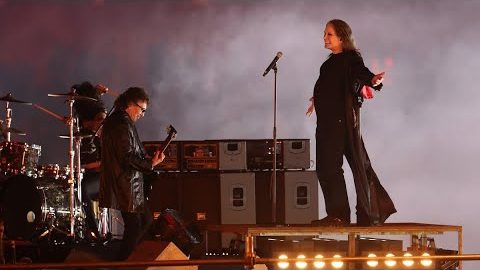 Sharon Osbourne revealed that the surprise mini reunion of the two former Black Sabbath bandmates, Ozzy Osbourne and Tony Iommi, all happened in a flash.

The duo’s recent performance at Britain’s Commonwealth Games is one of the highlights of the closing ceremonies, which took place in their very own hometown, Birmingham, England. In the past, Osbourne has expressed his hopes of wanting to be a part of the event.

However, Osbourne has been suffering from health issues in the recent years and the performance with Iommi marks as the Prince of Darkness’ first public performance since 2019. The last time was when the heavy metal icon shared the stage with Post Malone at the 2019 American Music Awards. Sharon tells Talk TV:

“They asked us six months ago, and Ozzy couldn’t possibly have done it ’til after his last operation.

“Then they saw Ozzy was at Comic-Con and they said, ‘Alright, come on – get him over!’ And we were, like, ‘Alright!’ And literally it was six days from their phone call to getting him there. It was just incredible.”

The rocker dislodged his pins in his spine in 2019 and was diagnosed with Parkinson’s disease in 2020. Most recently, he underwent surgery on his neck and back in June.

Meanwhile, Queen guitarist Brian May, admitted to getting a little “emotional” while watching the Black Sabbath members reunited. He expressed on social media:

“Must say I got a bit emotional seeing Ozzy and Iommi on stage together again. Epic!”