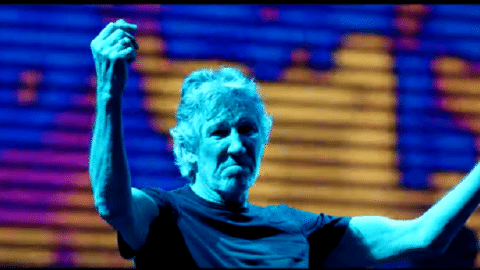 Known for being vocal with his political views, Roger Waters left a heavy message during his concert in Columbus, Ohio.

For Waters, “the obvious fact is, he didn’t sell out” noting that the upper levels of the arena were bare. Although he shared that they had upgraded all of the patrons to better seats, but still “we didn’t sell out, if you see what I mean,” he added as the crowd roared. Waters continued:

“However much they cut up my interviews on CNN to make me look like a prick, I will not sell out.

“We will stand on our tiny platform of human rights forever!”

More than a month after the debut of the This is Not a Drill tour, Waters and his band continue to deliver an evening of music that’s emotionally and politically charged. At times, however, it’s also poignant. He used messaging on the screens, delivered in a form that felt like Waters himself was typing text messages to the audience.

He also mentioned how formative moments like seeing a package bill featuring Gene Vincent and the Rolling Stones fed their goals to form a band. Also referenced was the eventual heartbreaking loss of Barrett, who left the band in the late ‘60s and departed from the industry altogether in 1972. One screen read:

“Losing someone reminds you, this is not a drill.”

Waters were able to manage to make the massive production feels surprisingly intimate, even though it’s loaded with every audio and visual element you can imagine in an arena. He set the stage for what the night was really all about after a fairly intense opening run of material.

The rock star also introduced “The Bar,” one of the new songs he wrote during lockdown. He said that he would only be playing a small portion of the composition. He explained why he called ‘The Bar’ “a place in my head.” For him it’s like “where you can go and maybe have a drink and certainly meet your friends and hopefully meet strangers as well. You can exchange opinions with strangers and friends with no fear or favor.” Waters added:

“It’s somewhere where you are welcome, where you can exchange your love for your fellow man without fear whatsoever and we are doing just that tonight. We’re exchanging feelings for one another.”

Waters ended the night with a performance of Pink Floyd’s “Outside the Wall,” which found him leading the band members offstage after introducing them one by one. The next scene that appeared on the screens was that of Waters and the band still performing backstage, this time surrounding each other, playing out the final notes in a circle.

On their way out, concertgoers, could be heard debating whether or not this is the best tour they’ve seen from Waters. Whatever it is, one thing’s for certain, it’s not to be missed. It’s a show which will leave you deep in thought about both the world and yourself.