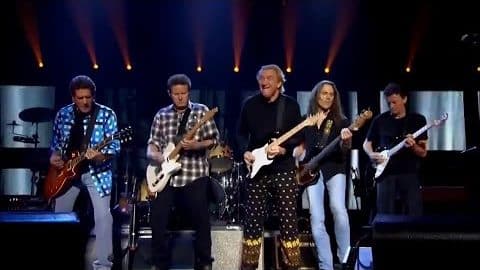 The Eagles have announced new dates of another U.S. leg of their Hotel California Tour that will run through November.

The brief six-date trek will launch on Nov. 15 in St. Louis and will wrap up on Nov. 25 in Fort Worth, Texas. Tickets for the upcoming leg will go on sale on Aug. 19. More ticket and tour details are available on the band’s official website.

Just like their previous legs of the Hotel California Tour, Eagles set lists are also expected to feature songs from their classic 1976 album, and still accompanied by an orchestra and choir.

Earlier this year, Eagles continued their Hotel California Tour, which has been going since 2019, but got halted in March 2020 due to the coronavirus pandemic and launching back in August 2021. While, Deacon Frey, the late Glenn Frey’s son, departed from the band in April after their first sold-out performance in February.

Deacon joined the band on the road in 2017, one year after the death of his father. He also joined Eagles as a special guest for two concerts back in June. The band said in a statement at the time:

“In the wake of his dad’s demise, Deacon, at age 24, did an extraordinary thing by stepping from relative anonymity into the very public world of his father’s long illustrious career.

“We are grateful to Deacon for his admirable efforts and we wish him well as he charts his future. Deacon’s Eagles family will always be here to surround him with love, support and goodwill, and he is always welcome to join us onstage at any future concerts if he so desires. We hope our fans will join us in wishing Deacon the very best as he moves into the next phase of his career.”