The Story Behind “Money For Nothing” by Dire Straits 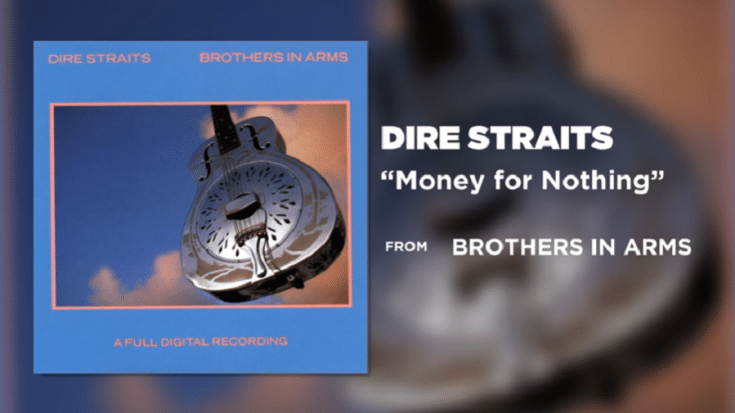 The Dire Straits single “Money for Nothing” was a huge success for the band. It topped several charts in the US and was also a hit in the UK and other countries. It earned them a Grammy Award for Best Rock Performance by a Duo or Group with Vocal and MTV VMAs Video of the Year.

The lyrics were from the POV of two working-class men who watched videos and gave their commentaries. Knopfler got the idea while he was at an appliance store in New York City. They had a bunch of TVs displayed on a wall and tuned in to one channel – MTV. As he stood there and watched, another man dressed in work clothes stood beside him and started commenting on what they saw. Knopfler immediately grabbed a pen and paper to write some of the things he said and used them for the song.

Knopfler told Bill Flanagan in 1984: “The lead character in “Money for Nothing” is a guy who works in the hardware department in a television/​custom kitchen/​refrigerator/​microwave appliance store. He’s singing the song. I wrote the song when I was actually in the store. I borrowed a bit of paper and started to write the song down in the store. I wanted to use a lot of the language that the real guy actually used when I heard him, because it was more real…”

While they were recording in the studio, Sting came to visit and listened to the demo. He was immediately impressed and so Knopfler challenged him to add something. Sting ended up contributing the line “I want my MTV.”

While “Money for Nothing” was commercially successful, it wasn’t without its share of controversy. The lyrics were deemed homophobic and so when they performed it live, Dire Straits would replace some of the words with something less vulgar.

Speaking to Rolling Stone magazine in 1985, Knopfler addressed the issue and said: “I got an objection from the editor of a gay newspaper in London – he actually said it was below the belt. Apart from the fact that there are stupid gay people as well as stupid other people, it suggests that maybe you can’t let it have so many meanings – you have to be direct. In fact, I’m still in two minds as to whether it’s a good idea to write songs that aren’t in the first person, to take on other characters. The singer in “Money for Nothing” is a real ignoramus, hard hat mentality – somebody who sees everything in financial terms. I mean, this guy has a grudging respect for rock stars. He sees it in terms of, well, that’s not working and yet the guy’s rich: that’s a good scam. He isn’t sneering.”

In 2011, the Canadian Broadcast Standards Council banned the song but it was eventually lifted.