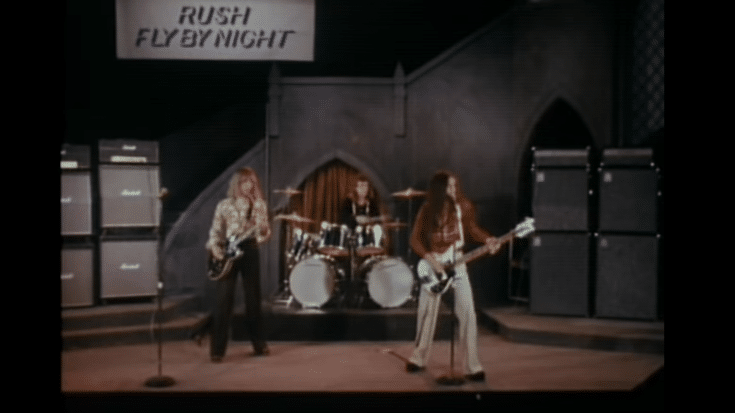 The title track to Rush’s second LP released on February 15, 1975, “Fly By Night” wasn’t a huge hit but it’s a classic through and through. Bassist Geddy Lee wrote the music while drummer Neil Peart penned the lyrics. Peart drew inspiration from when he was just 18 years old and he left town to go to England. This first trip away from his home in Canada became a pivotal moment in his life. Not only did he follow his passion for music but he also satisfied his desire to travel and explore the world.

The “Fly By Night” LP was the first to feature Neil Peart as he had just replaced John Rutsey. Peart became the primary lyricist because he read “a lot, fiction and non-fiction, catching up on the education I had more-or-less “dodged” in my teenage obsession with drums and rock music.”

In their 2005 DVD Rush-R30: 30th Anniversary World Tour, Peart discussed how he wrote lyrics. He said, “In simple terms, those early big pieces were driven by ambition. I was grappling with big, metaphorical themes and sweeping allegories, and it’s another mirror of personal development too — start out with the grand principles and idealistic dreams, then gradually move on to more concrete, real-life applications of those principles and ideals.”

The “Fly By Night” LP only peaked at #113 on the US Billboard 200 but it was eventually certified platinum by the RIAA.