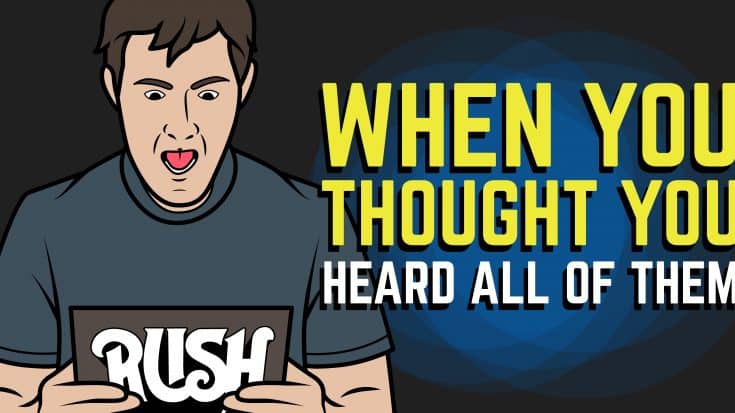 With their classic lineup of Geddy Lee, Alex Lifeson, and Neil Peart, it wasn’t long before they became prog-rock titans. They’re one of the few bands who embraced diversity in their music and were unafraid to explore uncharted territory. They added elements to their songs which shouldn’t work but surprisingly did.

But like every other rock catalog, they have songs that were largely overlooked in each of their album. Let’s check it out.

“Clockwork Angels” was produced by Nick Raskulinecz and he told Music Radar that “The Anarchist” was one of his favorites. He said, “To me, it’s all about the riff and this riff takes me back to the old days.”

One of their best tracks but sadly, it’s often overshadowed by the more popular ones.

If it sounds a bit weird it’s because this instrumental is the result of putting together the ideas they had but didn’t use. It does feature Lee’s vocals when he says a quote from Bobby “Boris” Pickett’s novelty song “Monster Mash.”

“Anthem” is a book by Ayn Rand, one of Peart’s favorite authors. Although Rush used the same title, the song itself has nothing to do with the book.

Lifeson told Guitar magazine, “‘Mission’ came out a lot better than I thought it would. It had gone through quite a few changes since its inception and it ended up being a much better song than it started out.”

This ballad marked the first time they used a Mellotron. Lee, who penned it, said: “‘Tears’ is a romantic ballad to give the album even more variety and depth. Mellotrons are very unique-sounding; they sound sorta electric, but also kinda stringy, they have this real resin-y sound to them, which is very cool and unique to that period.”

The song developed during Rush’s soundchecks. Peart explained, “Whereas most of the ideas we were dealing with this time were on the lesser side, and in some cases, like in “Jacobs Ladder”, looked at as a cinematic idea. We created all the music first to summon up an image – the effect of Jacob’s Ladder – and paint the picture, with the lyrics added, just as a sort of little detail, later, to make it more descriptive.”

Although Lifeson is a perfectionist when it comes to his solos, the one on “Cut to the Chase” is one of the few where they used his solo from the demo tape on the final take.

Rush didn’t always take themselves too seriously. Take this instrumental for example. It’s subtitled “Part IV: ‘Gangster of Boats’ Trilogy” but there’s actually no “Gangster of Boats” trilogy. Lee recalled, “It’s so much fun to do, too. We tried to do one on Presto…. and every time we started writing it, you know, we played this piece of music and be like, ‘Oh. This lyric fits perfectly with it.’ So we’d go off, we’d steal from the instrumental and it would become another song. And it kept happening over and over again. And finally Neil said, ‘Okay. You keep promising to do this instrumental, and I’m not giving you any more lyrics until you write the thing.’ So we sat down and wrote it.”

Peart lived near Lakeside Park as a child. But it’s not one of Lee’s favorite Rush songs though and he even called it “lousy”.

Peart referred to it as “a tour-de-force to write, arrange, and perform” but of course, in the end it was all well worth it.

This wasn’t played live until over three decades later in 2015.

A hypnotic piece of music.

It’s brilliant and addicting so we don’t know why it still doesn’t get the appreciation it deserves.

It’s one of their their heaviest songs, lyrically. Peart said, “There was a lot I wanted to address in that song, and it’s probably one of the hardest ones I’ve ever written. I spent a lot of time on it, refining it, and even more doing research. “

It starts off with an acoustic intro before transforming into a straightforward rocker.

Lifeson revealed to Guitar Player, “It was very, very difficult to get the mood right. I’m still not really sold on that song. It never ended up sounding the way I had hoped it would. Half of ‘Emotion Detector’ was done in one pass. Actually, that song had a whole different solo that took quite a bit of work.”

It wasn’t something Rush often did which surprised their fans and even Peart acknowledged that it was different from their usual style. He said, “Everybody had mixed feelings about it, but at the same time it expressed something essential that I wanted to say. That’s a song that has a marriage of vocals and lyrics I’m very happy with. But it took our audience a long time to get it, because it was rhythmically very different for us and it demanded the audience to respond in a different rhythmic way.”

It’s about Peart’s experience in traveling to London and it features French lyrics.