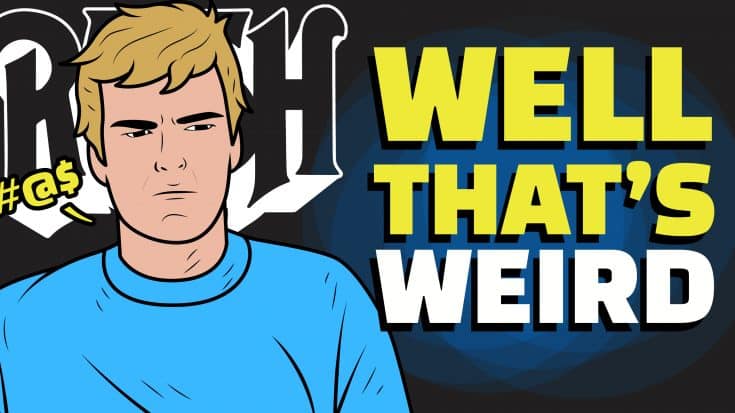 Rush formed in 1968 but it wasn’t until drummer Neil Peart joined in 1974 when they had their classic lineup. And Peart was the missing piece of the puzzle since he wasn’t just a virtuoso drummer but a prolific songwriter too. When he got onboard, he took over the role of primary lyricist, bringing various influences from books he’s read or his personal experiences.

Rush has plenty of musical gems in their catalogue, most of which became classics. But with their massive discography, they also have other memorable songs – what we’d call “weird”. Although it’s not always in a bad way. It may be because of the lyrics, time signatures, or just an element that’s rather out of place. Keep in mind though that what may be weird for us may be catchy & hypnotic to you and vice versa.

Not one of their finest musical moments but still not bad. Geddy Lee told Guitar World, “On a tune like ‘Available Light,’ where the bass just provides some simple, low-end support, I’d rather play the keyboards and sing. It’s just a question of what instrument will be rewarding to play from a player’s point of view. If the keyboard is simply playing a strict, four-chord repeating pattern, then I’d rather just program it into some MIDI pedal and have some fun playing bass.”

Although Peart wrote most of their lyrics, this one was penned by Lee. Peart revealed that it “features a very unusual (for us) middle instrumental section that might even be called (shudder) funky!”

Weird but in a good way.

It’s not their usual style but it grows on you.

One of their most criminally underrated tracks, it has odd time signatures and according to guitarist Alex Lifeson: “Once we had the guitar track down, we stuck a speaker cabinet outside—this was up at the studio in Morin Heights, Quebec—and we recorded the natural echo off the mountains in combination with the sound of splashing water and Geddy’s voice. We didn’t use any sort of synthetic echo on the water track.”

Musically, it highlights their virtuosity especially Lifeson with his stunning solo towards the end. But lyrically, well, just check it out for yourself.

A spectacular 11-minute long masterpiece. It features a five-minute instrumental intro and is an overall complex song. Lifeson recalled, “On the day we recorded it, Pat Moran, the resident engineer, set all the mics up and we ran the song down, partially to get balances and tones. Because it was a long song, we didn’t need to complete that test run. We then played it a second time from top to bottom and that’s what you hear on the album. Needless to say, Pat was shocked that we ran an 11-minute song down in one complete take. Practice doesn’t always make perfect, but it sure helps!”

It’s strange-sounding at first especially with the spoken-word part but it gets enjoyable after a while.

This is Rush’s foray into sci-fi themes. It’s weird, sure, but also mighty epic.