The Story Behind George Harrison’s ‘My Sweet Lord’ 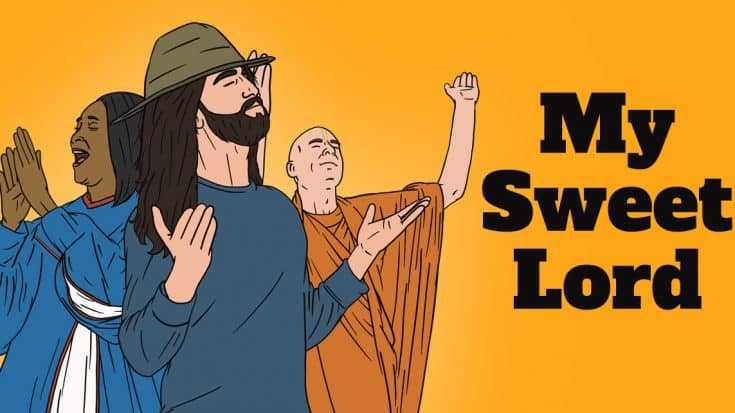 The one who truly benefited from The Beatles’ breakup was George Harrison. After disbanding, he finally found himself free from the creative and artistic constraints brought about by being in the same group as John Lennon and Paul McCartney. He always found it difficult to push his songs into every album and it wasn’t until their later years as a band when Lennon and McCartney allowed his compositions to make it to the final cut.

And so when Beatles was no more, Harrison had already accumulated so many compositions in his arsenal which is why his project post-Beatles was a triple album titled “All Things Must Pass” and his first single as a solo artist “My Sweet Lord” was released in November 23, 1970 in the US.

It became his signature song.

Harrison began working on the song in December 1969 while on a European tour with Delaney & Bonnie. He drew inspiration from the funk and gospel arrangement of Edwin Hawkins’ “Oh Happy Day”.

He recalled, “I remember Eric [Clapton] and Delaney & Bonnie were doing interviews with somebody in either Copenhagen or Gothenburg, somewhere in Sweden and I was so thrilled with ‘Oh Happy Day’ by The Edwin Hawkins Singers. It really just knocked me out, the idea of that song and I just felt a great feeling of the Lord. So I thought, ‘I’ll write another ‘Oh Happy Day’,’ which became ‘My Sweet Lord’.”

Lyrically, it’s pretty simple. And according to him, “I did the voices singing ‘Hallelujah’ first and then the change to ‘Hare Krishna’ so that people would be chanting the Maha Mantra – before they knew what was going on!”

Towards the end of the track, there’s a Vedic Sanskrit prayer – making it an integral part to the song’s overall appeal. And at the time when he finished his composition, The Beatles were still together and Harrison didn’t plan yet on embarking on a solo career. So, he gave it to Billy Preston which Harrison co-produced. When the Quiet Beatle recorded it for himself, he enlisted Preston’s help.

It was a huge hit for Harrison as it topped the charts not long after its release. But it wasn’t without controversy because he was slapped with a copyright infringement suit by Bright Tunes Music Corporation alleging the similarities between “My Sweet Lord” and Ronnie Mack’s song “He’s So Fine”.

He later commented, “They then sued me over a song written by a guy who died a while back that I had never even heard of anyway, although I’d heard the song.” The case went on for years and the court told him to pay $1,599,987 to Bright Tunes.

Harrison noted that “The only shame about it was if the writer of ‘He’s So Fine’ had been alive in the first place there probably would have never been a lawsuit. Gods knows I never sued anybody about all the songs of mine that got stolen.”

Still, “My Sweet Lord” is nothing short of a masterpiece and it continues to be a staple in classic rock radio stations.