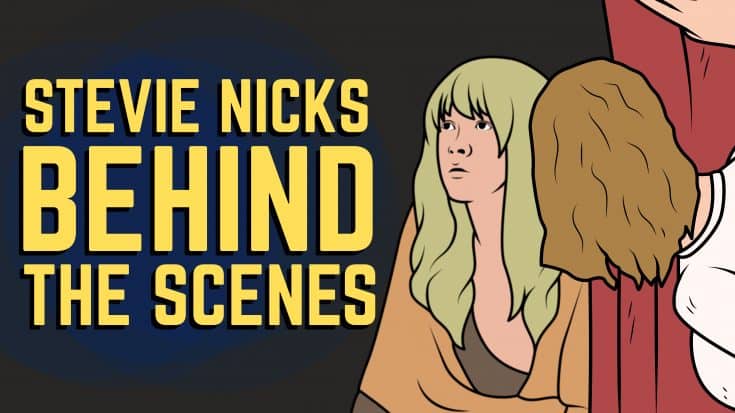 Stevie Nicks has one of the most successful and enduring careers in rock ‘n roll. From her time with Fleetwood Mac to becoming a solo artist, she made her mark in the genre and in turn, inspired countless young women to pursue their passion in music. Here are some interesting stories about her:

It was the first LP to feature Nicks and Buckingham. Record producer and studio engineer Ken Calliat recalled, “She believed she had magical powers. She probably thought she was chanting up a good mix.”

10. Instead of attending a New Year’s Eve party with his date, producer Keith Olsen spent his evening trying to hire Buckingham and Nicks.

9. Her drug use began getting worse because of a pre-show ritual Fleetwood Mac did by having a bump of coke.

Nicks used to struggle with stage fright and this served as a temporary relief for her. She told Classic Rock magazine, “All of us were drug addicts, but there was a point where I was the worst drug addict.”

8. She toured with her own coven.

Before appearing on American Horror Story, Nicks has been closely associated with witchcraft mostly because of “Rhiannon” and her witchy outfits. She continues to perform today but at one point in her career, touring exhausted her mentally and physically. At the time, her relationship with Buckingham was also already strained so she turned to bandmate Christine McVie and together, they formed a band of young, blonde women who dressed in black lace. And of course, they followed her everywhere.

7. She almost went blind after partying so hard.

Following the massive success of “Rumours”, the band organized a party before their tour kicked off as they celebrated the news that their LP just went platinum. It went on for 48 hours straight and since Nicks was wearing contact lenses, she forgot to take them off which in turn, wore off her cornea. Their tour manager bandaged her eyes which helped prevent her from permanently losing her sight.

6. Her affair with Mick Fleetwood began because of drugs.

When she appeared on Oprah’s Master Class in 2013, Nicks admitted: “Mick and I never would have had an affair had we not had a party and all been completely drunk, messed up and coked out. [We] ended up being the last two people at the party. So guess what? It’s not hard to figure out what happened — and what happened wasn’t a good thing. It was doomed. It was a doomed thing. Caused a lot of pain for everybody. Led to nothing. I’m like, ‘Gee, could you have just laid off the brandy and the coke and the pot for two days?’”

5. Things between her and Buckingham became “physically ugly”.

It was before their world tour in support of “Tango in the Night” after Buckingham announced he was leaving the band and Nicks challenged his decision. The band members met at Christine McVie’s house and according to Mick Fleetwood, Buckingham slapped Nicks and bent her over the hood of his car. Other people had to pull him off of her. After which, he stormed out. Christine McVie remembered, “That was in the courtyard of my house. There was a bit of a physical fight, and she wasn’t beating him up. It wasn’t nice.” Buckingham denied any “physical violence” however.

4. She burned a hole in her nose and still, that didn’t stop her from getting high.

With so much money to burn, she bought $1 million worth of cocaine and ended up burning a hole in her nose the size of a dime! She also suffered regular blackouts and even had nose bleeds.

3. She became so addicted to cocaine that she brought it with her via a gold and turquoise bottle inlaid with diamonds that she wore around her neck.

This ensured that she always had coke whenever she needed a bump.

2. She turned down Prince’s offer of a collaboration.

According to Nicks, Prince sent her a demo tape of “Purple Rain” and asked her to write the lyrics. She refused because apparently, she was so “scared”. She told the Minneapolis Star Tribune, “It was so overwhelming, that 10-minute track… I listened to it and I just got scared. I called him back and sad, ‘I can’t do it. I wish I could. It’s too much for me.” She then added, “I’m so glad I didn’t, because he wrote it, and it became ‘Purple Rain’.”

1. She had a brush with death.

Because cocaine increases the heart rate and blood pressure, a brain aneurysm isn’t unlikely for drug addicts. In the ’80s, Nicks had a serious health scare when her doctor informed her she was well on her way to a brain hemorrhage if she did so much as just one line of cocaine. She told Billboard, “Sometimes you can’t see it in yourself, but you sure as heck can see it in someone else. And suicide was never my MO. I’m basically a happy person. I was a happy person back then. I just got addicted to coke, and that was a very bad drug for me.”