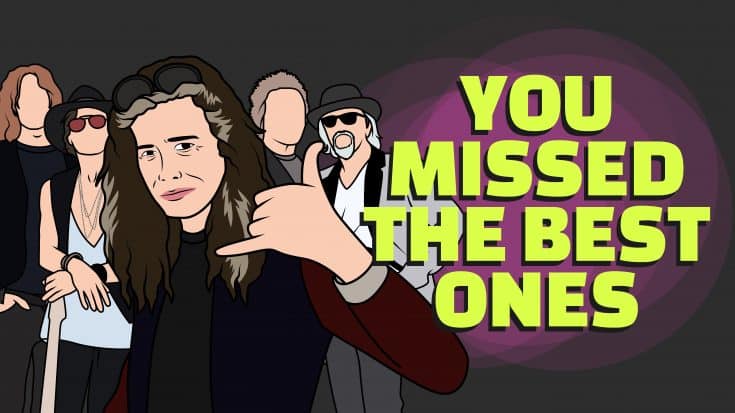 Aerosmith – unless someone’s been living under a rock, everybody knows who they are even if they’re not classic rock fans. Since launching their career in the ’70s, they’ve had a string of hits that ensured their place in the rock pantheon. They’re one of the few bands who managed to resurrect their career by making a stunning comeback nobody could have predicted.

For this list, we’re going over one underrated song from every Aerosmith studio album.

Even way past his heyday, Steven Tyler delivered the goods with his powerful vocal performance.

This blues standard was originally recorded by Muddy Waters. Aerosmith covered it to pay tribute to their earliest influences.

Tyler imitating a cat’s wail at the beginning of the song will never get old.

It’s one of the songs that touch on their history with drug use.

The intro is totally unexpected but it’s an absolute gem.

The longest song on their debut LP, it’s often overshadowed by “Dream On” and “Mama Kin”.

“Just Push Play” is not everyone’s cup of tea, even Joe Perry admitted it’s his “least favorite” but “Beyond Beautiful” is actually pretty good.

Speaking about how he wrote it, Tyler recalled in their memoir “Walk This Way”, “For two months, I’d been totally blocked, writing lyrics for this track we had done with Joe. ‘My name is nah nah nah, I come from Yonkers High, and I get drunk at night.’ One night I had such a revelation to write the story of the band, how Aerosmith got started … I was so excited to be back on track.”

Originally recorded by The Joe Perry Project, Aerosmith re-recorded it five years later after they reunited.

It’s a classic tune even if Perry didn’t play on it.

Tyler said, “This one was just about how many people died from holy wars because of their beliefs or non-beliefs. With that one, my brain was back with the knights of the round table…”

Written by Tyler and bassist Tom Hamilton, Tyler revealed in his autobiography: “Here I was thinking about an orphanage when I wrote those lyrics. I’d try to make the melody weep from the sadness felt when a child is abandoned.”

A staple in their concerts, drummer Joey Kramer once shared that it’s his favorite Aerosmith track to perform live.