The Most Outrageous Mötley Crüe Stories 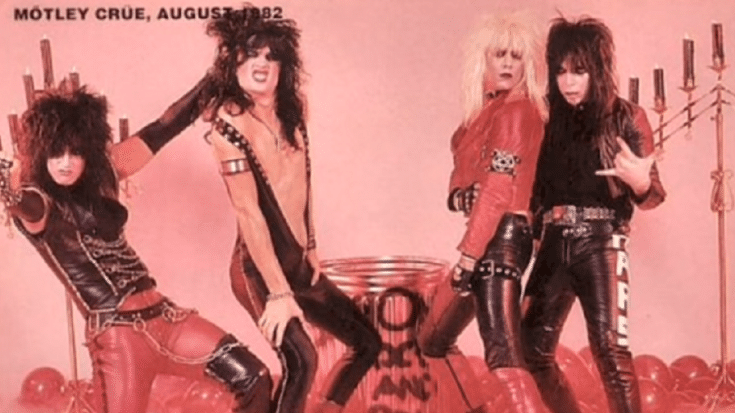 They’re often dubbed as the most notorious band in rock ‘n roll so of course they have to live up to everyone’s expectations. The Mötley Crüe boys have no shortage of unbelievable stories and insane moments of mischief. They may be long past their heyday but with the help of their biopic film “The Dirt,” people will surely be revisiting some of their craziest and wildest adventures.

At the peak of their stardom, they were the kings of debauchery which made them controversial and further cemented their reputation as rockstars. And so we listed down five of the most outrageous tales about them.

5. They used to rub egg burritos on their crotches to cover up their dirty deeds.

According to Vince Neil, “We were always fu**ing other chicks at the studio and backstage. We would take Tommy’s van to a restaurant called Noggles to buy these egg burritos and then rub them on our crotches to cover the smell of the girls we had just fu**ed… we never thought about going into the restroom and just washing our d*cks.”

4. Tommy Lee once slept with a woman so he can drive her car.

Vince Neil wrote the following in their autobiography “The Dirt.”

“One chick who used to come over was an obnoxiously overweight redhead who couldn’t even fit through the window. But she had a Jaguar XJS, which was Tommy’s favorite car. He wanted to drive that car more than anything. Finally, she told him that if he fu**ed her, she’d let him drive the Jaguar. That night, Nikki and I walked into the house to find Tommy with his spindly legs flat on the floor and this big, naked quivering mass bouncing mercilessly up and down on top of him. We just stepped over him, grabbed a rum and Coke and sat on our couch to watch the spectacle: They looked like a red Volkswagen with four whitewall tires sticking out the bottom and getting flatter by the second. The second Tommy finished, he buttoned up his pants and looked at us.

3. Tommy Lee and Nikki Sixx had this disgusting pact about not washing up or showering and still keep on hooking up with groupies.

A few weeks of not even cleaning up and a groupie was going down on Sixx when she ended up vomiting spaghetti all over his genitals after she was grossed out with the smell. Some say this became the inspiration for Guns ‘n Roses 1993 album “The Spaghetti Incident.”

1. Nikki Sixx and Ozzy Osbourne challenged each other in 1984.

With these two, you just know it’s not going to be an ordinary challenge. First, Sixx dared Osbourne to snort a line of ants which as we already know, the Prince of Darkness did without a moment’s hesitation. The next is an account of what would go down in history as one of the craziest and wildest things that ever happened in rock ‘n roll.

“Then he [Ozzy] hiked up the sundress, grabbed his dick and pissed on the pavement. Without even looking at his growing audience … he knelt down and, getting the dress soggy in the puddle, lapped it up. He didn’t just flick it with his tongue, he took a half-dozen long, lingering and thorough strokes, like a cat. Then he stood up and, eyes blazing and mouth wet with urine, looked straight at me. ‘Do that, Sixx!’”

Sixx peed in public and Osbourne licked it. After which, Sixx threw up his hands and said, “You win.” Guess someone’s a whole lot wilder than them.