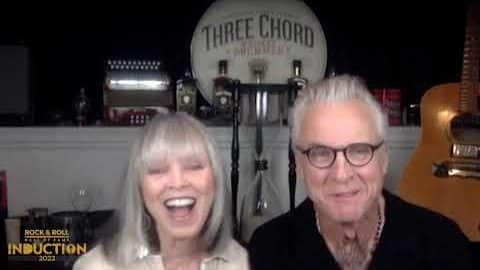 The 2022 Rock & Roll Hall of Fame induction ceremony will likely be remembered as one of the best and one of the most emotional ceremonies we’ve seen.

The definitive lineup of Judas Priest reunited for the first time in more than a decade as guitarist K.K. Downing returned to his former group for an intense three-song set. There was another planned reunion that didn’t come to pass, with former Duran Duran guitarist Andy Taylor sending an open letter from abroad, revealing his stage 4 prostate cancer difficulty as the reason he couldn’t join his ex-bandmates for their induction.

The MTV-centric evening of entertainment had plenty of excitement, thanks to mighty sets by Eurythmics, Pat Benatar, and Neil Giraldo; and surprises, like Aerosmith’s Steven Tyler joining Eminem onstage. There was also Dolly Parton, who proved she could rock, with Rob Halford and others joining to support her seal the deal during an all-star rendition of “Jolene” — though she hardly needed any backup to make her point.

There were also plenty of wonderful moments that happened with just words. Bruce Springsteen revealed the story of how Jimmy Iovine convinced him to give away a song that became Patti Smith’s biggest-ever hit, “Because the Night.”

John Mellencamp honored the important work that entertainment lawyer Allen Grubman has done for countless musicians in the industry — himself included — while using his platform to explicitly condemn anti-semitism. Although Carly Simon was unable to attend, she sent a warm note to share her modest appreciation for the Rock Hall honors.

Here are the 10 best quotes from the Rock & Roll Hall of Fame 2022 induction ceremony,

John Mellencamp Condemns Antisemitism
“I cannot tell you how fuckin’ important it is to speak out if you’re an artist, against antisemitism, against all forms of hate speech. Whenever you hear hate speech, and if you hear someone saying something derogatory about someone else. … We’re all human beings. I don’t give a fuck if you’re Jewish, Black, white, tutti frutti, I don’t care. Here’s the trick: Silence is complicity. Can I say that again? Silence is complicity. I want to say, I’m standing here tonight loudly and proudly and in solidarity with Allen, his family, all of my Jewish friends, and the entire Jewish people of the world. Fuck antisemitism and fuck anybody who says anything in that manner.”

Alice Cooper Inducts Judas Priest
“[Judas Priest] defined the sound that we call heavy metal, and their sound is unmistakable. Their explosive dual-lead guitar attack unleashed the roar that has inspired thousands of bands in their garages. Their bass and drums rumble like an L.A. earthquake. And finally, what can you say about Rob Halford’s vocals? Never have screams covered such a range. Is there any emotion that he can’t express? A note that he can’t hit? Or one that he can’t hold seemingly forever? He is simply one of the greatest singers in heavy metal history. Judas Priest defines heavy metal. It’s not just about their music. Judas Priest also defined the look that defines heavy metal: the black leather, the metal studs, the chains, the motorcycle. It sometimes feels like those were always elements of what heavy metal looked like, but they weren’t. Heavy metal didn’t have that until Judas Priest.”

Bruce Springsteen Inducts Jimmy Iovine
“One afternoon, [Jimmy Iovine] gets me in the car and takes me on a little drive to Coney Island. On the way, he casually drops, ‘Bruce, what are you doing with that song, “Because The Night”?’ ‘What do you mean? It’s an outtake, it’s unfinished.’ ‘That’s what I mean. If you’re not going to finish it, can I have it?’ ‘What are you going to do with it?’ ‘I want to give Patti Smith a song.’ So we’re in the Mercedes, it’s a sunny day, with a pal. I love Patti, it’s a great chorus. Sure, why not? Of course, with Jimmy’s guidance, Patti turns ‘Because The Night’ into a huge Top 5 hit record, which is something I could never have done, because I didn’t have the guts to turn it into a love song as Jimmy knew that Patti would. Jimmy knows great songs, and he knows who can sing them.”

Andy Taylor Pays Tribute to Duran Duran
“I’m proud of everything we’ve achieved together and of the way you have continued. As a guitar player in a progressive band from the synth days of the early ’80s, literally from the day I met Nick [Rhodes], John [Taylor], Simon [Le Bon], and Roger [Taylor], they truly valued the contribution of a rather noisy, versatile Northern brat. We all grew up on the same vinyl records and live gigs, from David Bowie to Roxy Music, the Sex Pistols, and of course, Chic. I could go to all those places as a player and develop a hybrid guitar style that fitted this amazing concept of a band. … Now, for the bad blood: Well, the good news is that there is none, just pure love and respect for everything we wrote, recorded, and achieved together. What’s the point? There’s no stopping this 44-year thing called Duran Duran.”

Pat Benatar and Neil Giraldo
Benatar: “I just want to say that all is forgiven. … And you: my partner, my love. Forty-three years ago in a rehearsal studio in New York — could you have imagined this night tonight? We probably would have done it separately on our own, in our own way, but it never would have been this much fun.”

Giraldo: “If you’re shut down, struggling emotionally or physically, if you’re afraid to leave your bedroom or you’re bullied, start playing an instrument and start dreaming. … If you want to be a songwriter, read books and read a lot of them. Don’t let outside negative noise live rent-free in your lives, ever.”

Dave Stewart of Eurythmics
“I first met Annie [Lennox] when she was 21 years old and I was 24. Like every inductee tonight, we’ve walked a very long and sometimes perilous road to be standing here tonight. We’ve had our share of glory and grief, living on less than $20 a week in a derelict spot. By the way, those were some of the best times. We fought fearlessly for our art and we would not let any individual or corporate company interfere with our creativity. That was ours and ours alone. Annie and I wrote over 120 songs together. … Being in a tiny room with Annie and talking abstractly for hours about what we were trying to do with our art were some of the most thrilling times in my life. We saw infinite possibilities and refused to be constrained by convention. As Annie revealed more and more personas, we traveled like a rocket through electronic music, to R&B, soul, gospel — no one could stop us. Because we believed in ourselves and we believed in each other. We were led by the hands of grace and protected by the army of our heart.”

Janet Jackson Inducts Jimmy Jam and Terry Lewis
“Needless to say, I’m not the only artist that Jimmy and Terry have worked with; I’m just their favorite. The artists they’ve collaborated with reads like a who’s who of popular music over the last four decades. … Their production process also allowed them to collaborate with Rock & Roll Hall of Fame inductees Joni Mitchell as well as Carly Simon. What’s unique about Jimmy and Terry as producers and songwriters is that they gave everyone their own custom-made sound, which made all of the great artists sound like the best versions of themselves. Jimmy and Terry have a vision, and it’s a distinctive sound, of course. But they put the artists they work with first.”

Glenn Tipton of Judas Priest
“You know, you start off all of those years ago, and you rebel against the standard. You want to be your own band, and you want to be different and try to be unique. You carry that through with you over the years until suddenly, you realize that you’ve become the establishment and the people are rebelling against you! And here we are the Rock and Roll Hall of Fame, at last!”

The Edge Inducts Eurythmics
“It takes courage to dream, and it takes even more courage to continue dreaming with the inevitable disasters of life and art that seem to conspire against you. … That’s what’s so inspiring about the story of Eurythmics to all of us dreamers. Their sweet dreams were forged from the furnace of failure and faith. Annie Lennox and Dave Stewart met in 1975 when they were both struggling musicians. They became lovers and co-founders of the Tourists. The band enjoyed some success but disbanded in 1980. Remarkably, this breakup mirrored the end of their romantic relationship, but it did not end their creative partnership. It actually kick-started it. They formed Eurythmics later that year and, up to that point, had never written a song together. I so love the songs of Annie and Dave, because they dare to take a hard look at difficult and uncomfortable subjects — emotional suffering and loss, isolation and betrayal — and bring them to great pop songs.”

Carly Simon
“I am humbled, shocked, proud, overachieved, underqualified, and singularly grateful to everyone without whom I really couldn’t be here. One of the greatest things about music is its uncanny knack for making physical art out of formless emotions like joy and pain, just through the strength of our feelings. When we cannot share our grief, we are awfully lonely creatures. Mostly, I want to thank you, the Rock & Roll Hall of Fame, for recognizing me and for making sure that distinction and achievement will always have an edge.”