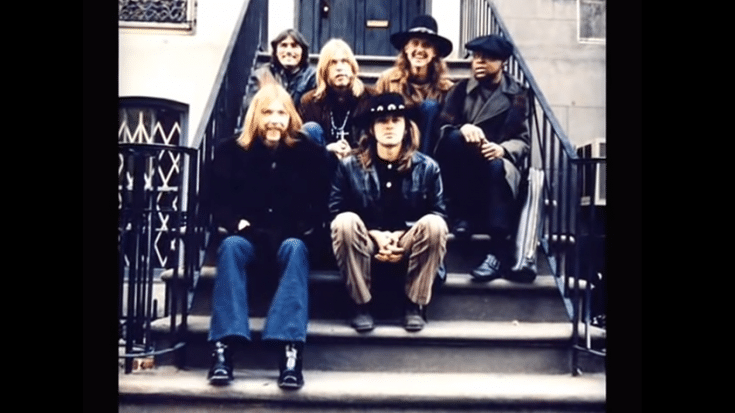 The Allman Brothers Band was at the forefront of Southern rock music in the ’70s. With brothers Duane and Gregg Allman leading the group, they made a mark in the genre by mixing elements of country, blues, and jazz with rock. Their first two records weren’t commercially successful but they struck gold with the live release At Fillmore East which captured the band’s magical performances on stage. It catapulted them to another stratosphere of stardom.

But like every other story of success, The Allman Brothers Band had their share of tragedies and bumps in the road.

1. There was their hedonistic lifestyle which isn’t exactly unheard-of in rockstars. But they took it to the next level with their use of a wide range of drugs. Butch Trucks told Jim Clash, “The sex and drugs outweighed the rock and roll.” Gregg Allman also shared it in his memoir titled My Cross to Bear with an excerpt published by Rolling Stone. He wrote, “Our roadies had roadies.”

Speaking about the aircraft they bought, he said: “The first time we walked onto the plane, ‘Welcome Allman Brothers’ was spelled out in cocaine on the bar.” They embarked on a 41-date trek and were paid $80,000 per show but at the end of the tour, they only had $100,000 left.

More than the massive amount of money they blew for drugs, Gregg Allman also became involved in a lengthy drug trial after his personal road manager and valet John “Scooter” Herring was charged with multiple counts of conspiracy to distribute narcotics. Allman had to testify against him and he described it as “terrible”. Allman added that he “was up against the wall, I was in the corner, backed in the corner.”

2. The Allman Brothers Band showed their resiliency when they still pushed on even after experiencing multiple tragedies. First was the death of leader Duane Allman on October 29, 1971 while they were still riding high on the success of At Fillmore East. He was killed in a motorcycle accident because massive internal injuries. A year later, bassist Berry Oakley experienced almost the same accident only three blocks from where Duane was badly injured. He was thrown from his motorcycle just like Duane. He later died from cerebral swelling.

3. Gregg Allman hit an all-time low when the band was inducted into the Rock and Roll Hall of Fame in 1995. He wrote in My Cross to Bear that “it should have been the greatest week of my life.” He was still battling alcohol problems and so he was at the event physically, but “otherwise I was out of it – mentally, emotionally and spiritually.” For the days leading up to the induction, he was drunk everyday including the day of the ceremony. Although there was so much he wanted to say, he only managed 14-second speech: “This is for my brother. He was always the first to face the fire. Thank you.”

Because of the embarrassment he felt, he finally summoned the courage to get help. He passed away on May 27, 2017 due to complications from liver cancer.