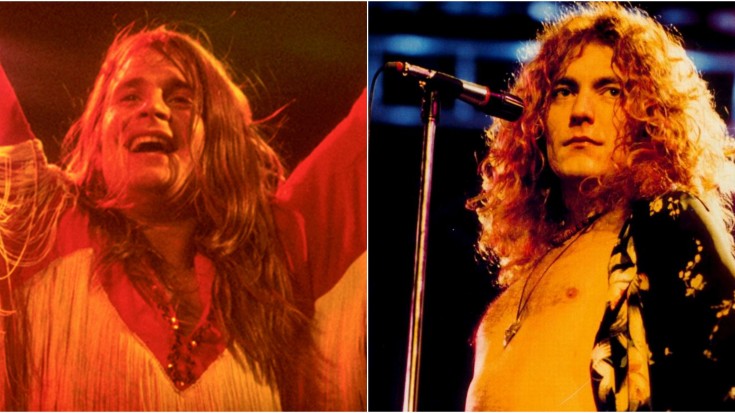 (L) via ultimateclassicrock.com (R) via pintrest.com

According to Black Sabbath lead-singer Ozzy Osbourne and guitarist Tony Iommi, a recording of a Black Sabbath/Led Zeppelin jam session may actually exist. Ozzy claims that in 1975, the two bands got together in studio to jam with each other while Black Sabbath were recording their album Sabotage. According to Iommi Robert Plant, John Paul Jones and John Bonham (Jimmy Page unfortunately was absent that day) all made the trip down to Morgan Studios in London to visit Black Sabbath during the recording process. While there, the bands jammed together on Sabbath’s hit “Supernaught,” a personal favorite of Bonham’s.

“They came in and John’s going, ‘Let’s play Supernaut!’…So he sat behind the kit and we started to play it. Of course, he didn’t play it right, but we just carried on and went into a jam.” –Iommi revealed

Plant spent most of the session looking on, while Bonham mainly ran the show. Ozzy claims the meaning behind Zeppelin’s visit was not strictly about jamming. Zeppelin’s visit was to offer Sabbath a deal to sign onto their record label: Swan Song. However Black Sabbath declined the offer, claiming they had just endured a nightmare of issues with their manager. The two bands had some prior history together before the 1975 meeting. Bonham had previously jammed with Black Sabbath in the band’s earlier days, while Ozzy knew Plant and Bonham from his days in Birmingham.

Unfortunately, the status of the session’s tapes is unknown, but there is still a possibility they may still exist somewhere. Until then, we could only imagine “Black Zeppelin” or “Led Sabbath” would sound something like this: