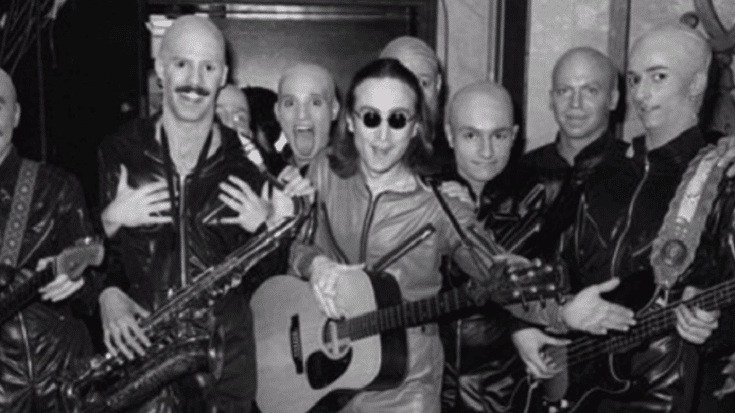 Just before settling down into years of domestic bliss in New York, John Lennon’s final public performance took place on April 18, 1975 in the Grand Ballroom of the Hilton Hotel in New York. It was just a few months before his son Sean was born.

He was in a good place at the time – a judge reversed his pending deportation order and the legal issues surrounding songwriting royalties was finally over.

And so on that particular night, he played a tribute show titled A Salute to Sir Lew Grade: The Master Showman. Dangerous Minds referred to Grade as “a powerful media mogul.” He sued both Lennon and Paul McCartney for songwriting credits. While McCartney won the suit, Lennon was basically forced to settle and in the end, Grade’s Associated Television publishing company became the co-publisher of all his new songs in 1974.

The show was quite bizarre. The band of bald men with masks on the back of their heads was introduced as “John Lennon Etc.” although the BOMF on the bass drum refers to their real identity – Brothers of Mother F**kers. Lennon himself donned a red jumpsuit.

Speaking about the masks, Lennon reportedly said: “It was a sardonic reference to my feelings on Lew Grade’s personality.”

He performed three songs – Little Richard’s “Slippin’ and Slidin’” and Ben E. King’s “Stand By Me” (both from his then-new album of cover songs appropriately titled Rock ‘n’ Roll), and “Imagine” which would turn out to be the last song he ever performed live.