The Insane And Tragic Life Of Keith Moon 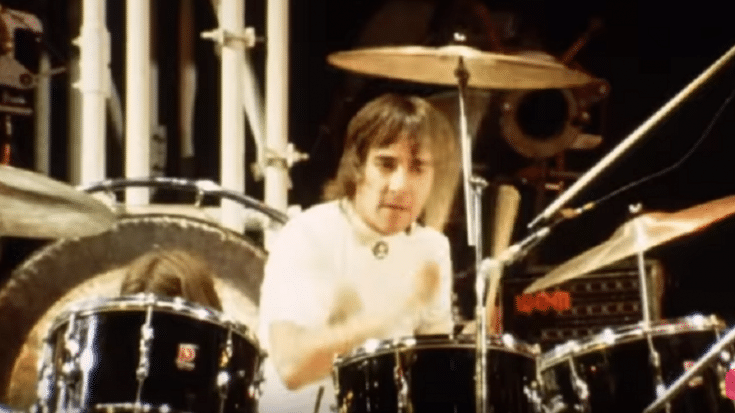 Keith Moon was often called “Moon the Loon” and for good reason. He worked hard behind the kit and partied even harder. More than his powerful and insane drumming skills, he’s also known for his crazy, often hilarious, but self-destructive antics. The man lived life on the fast lane and in the end, it was his lifestyle that caused his death at 32.

Born on August 23, 1946 in northwest London, Moon grew up to be an extremely active child. Aside from music, he also enjoyed listening to the British comedy program The Goon Show. His music teacher’s report was a pretty spot-on description of Moon – “has great ability, but must guard against a tendency to show off.”

He initially tried playing the bugle but found it too complicated so he turned to drums instead. Even at a young age, he already showed fondness for practical jokes, science projects and unsurprisingly, explosions.

In 1962, he joined his first band called The Escorts. A few months later, he joined the cover band Beachcombers.

He was only 17 on April 1964 when he auditioned for The Who as the replacement for Doug Sandom.

“they said go ahead, and I got behind this other guy’s drums and did one song-‘Road Runner.’ I’d several drinks to get me courage up and when I got onstage I went arrgggGhhhh on the drums, broke the bass drum pedal and two skins, and got off. I figured that was it. I was scared to death. Afterwards I was sitting at the bar and Pete came over. He said: ‘You … come ‘ere.’ I said, mild as you please: ‘Yes, yes?’ And Roger, who was the spokesman then, said: ‘What are you doing next Monday?’ I said: ‘Nothing.’ I was working during the day, selling plaster. He said: ‘You’ll have to give up work … there’s this gig on Monday. If you want to come, we’ll pick you up in the van.’ I said: ‘Right.’ And that was it.”

His arrival changed the group’s dynamics and sound. Moon enjoyed touring and being extremely energetic and hyperactive, he easily got bored when they didn’t perform live. The Who became known for their aggressive way of performing which included destroying their musical instruments.

Keith Moon apparently didn’t outgrow his fondness for practical jokes. He was constantly restless which is why he always came up with some crazy antics – some are hilarious but others border on self-destruction. There was no such thing as “too much” for him.

He was a dangerous prankster because he pulled off his pranks with so much gusto and had absolutely no care about the consequences. Here are 10 of his (in)famous antics listed in order of “wildness”:

10. For The Who’s UK tour in 1967, their opening band was The Herds. Moon, with the help of bassist John Entwistle, rigged the gong used by drummer Andrew Steele so that every time Steele tries to bang the gong, Moon and Entwistle would pull on the rope and the gong would move out of his reach.

9. In 1969, Moon and Larry Smith of the satirical rock group the Bonzo Dog Doo-Dah went to a Marks and Spencer shop. Smith was the first to go and asked for their most durable trouser. After it was shown to him, Moon entered the store and offered to help Smith test the trouser’s durability. They both took one leg and ended up tearing it into two pieces. The staff called the authorities and just in time, their limo driver arrived and said, “Are those one-legged trousers? They’re just what I’ve been looking for!” The driver paid for it and each leg was even packed separately.

8. Moon became friends with actor Oliver Reed because of Tommy. In 1975, during a red carpet premiere, someone threw a lemon curd pie and hit Reed in the face. Then, someone handed him a note that read: “Pie in the Face International. You have been selected by Mr. Keith Moon to become a member.” There was also a certificate with this message written on it: “You are a member, sponsored by Keith Moon.”

7. This didn’t happen just once. When they’re in small villages, Moon liked to make false announcements from his car. He either used police bullhorns or installed speakers in his vehicle. These “announcements” ranged from harmless to that which could likely cause panic e.g. possible tidal waves.

6. Keith Moon wasn’t above going the extra mile when it came to his practical jokes. The guy always went all-out even if that means dressing up as a bald vicar. In stark contrast with his costume, he would shout obscenities at old ladies and basically traumatize them for life.

5. Moon once staged a fake kidnapping with the help of the Bonzo Dog Doo Dah Band. And let’s just say it looked so real that the authorities caught up with them.

4. During their appearance at The Smothers Brothers Comedy Hour on September 17, 1967, he loaded his drum kit with more explosives than his “usual”. The explosion almost blew the band off the stage – it singed Townshend’s hair and affected his hearing. Another guest, actress Bette Davis, fainted after the explosion.

3. On August 25, 1972, Moon sought Pete Townshend’s help to carry the waterbed into the elevator and send it down to the lobby. But it burst before they could remove it and released huge amount of water into the hallway. Realizing he’s about to be in big trouble, Moon went ahead and called the manager to report the “incident.” He claimed that the mattress burst and in the process, destroyed his expensive clothes. Apparently, Moon’s an impressive actor as well because by way of apology, the manager moved The Who to the Presidential Suite.

2. In 1970, he and former Bonzos frontman Viv Stanshall had to wear Nazi officer uniforms for a photo shoot. They didn’t take it off while drinking and even wore the same costume for a few days. That’s not even the worst part. They decided to hire an open-top Mercedes and take a trip to a Jewish neighborhood.

1. He became obsessed with cherry bombs and as The Who toured around the world, Moon made his mark on each hotel by destroying the toilets using the explosives. He once said, “All that porcelain flying through the air was quite unforgettable.”

“When you’ve got money and you do the kind of things I get up to, people laugh and say that you’re eccentric, which is a polite way of saying you’re fucking mad.” – Keith Moon

He may have seemed like someone who just wanted to have fun but Keith Moon, like every other rock ‘n roll musician back in the day, had his share of excesses. He was known to party so hard that he once drove a car straight into a swimming pool and also lost a tooth while partying.

On September 7, 1978, Moon and girlfriend Annette Walter-Lax came home to their apartment after dining with Paul and Linda McCartney in Covent Garden. When they got to their flat, Moon took 32 clomethiazole tablets. Walter-Lax found him dead the following afternoon.