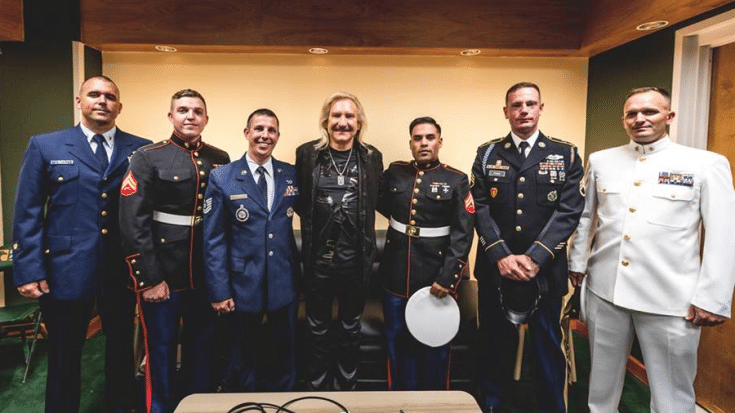 Wether he’s striving to conserve the environment or building halfway houses for displaced women, Joe Walsh is at the front lines. The musician’s commitment to charity work is as prolific as his music career. After decades of  taking part in charity concerts, the Rock and Roll Hall of Famer decided to organize an annual event very close to his heart. In 2017, Walsh was inspired by his life as a Gold Star Kid to start VetsAid.

The rock star’s father was a flight instructor for the Lockhead F-80 Shooting Star in Okinawa- he died on active duty when Walsh was 20 months old. Born Joe Fidler, his name was changed when his step-father, who worked in Army intelligence, adopted him. Years later Walsh remained close to the military, giving free guitar lessons to wounded veterans at the Walter Reed National Military Medical Center. His participation with veterans is what ultimately lead to VetsAid.

Stated on the VetsAid website, Joe Walsh contextualized the event,

“We’re all in this together as Americans and seems to me lately that people are forgetting that. So I decided to put on a show, raise some money, bring people back together and celebrate our vets.”

The official launch of VetsAid took place in 2017 with a concert in Fairfax, Virginia. His pals Keith Urban, Zak Brown and Gary Clark Jr. performed alongside Walsh. The event raised $360,000.00 for veterans associations desperately in need of support.

In 2018, VetsAid took place at the Tacoma Dome in Tacoma, Washington. The concert was held on November 11, 2018 with music from Don Henley, James Taylor, Chris Stapleton, and Haim. Of course, Joe Walsh took the stage. 170,000 fans, veterans, and active duty military and families attended the stunning event. The event tripled the funds raised from the inaugural concert.

On March 6th Walsh announced the disbursement of $795,000.00 in grants that VetsAid raised in 1 night. The money was disbursed to VetsAid charity partners including the Semper Fi Fund, Hire Heroes USA, Children of Fallen Patriots Foundation and several others. 12 small grants of a combined $10,000.00 were disbursed among smaller organizations for veterans.

He was also motivated by this,

“I met a lady in Illinois who was a Blackhawk helicopter pilot who was shot down. She lost both her legs and has partial use of her arms. And she wanted to run for the House of Representatives. Her name was Tammy Duckworth. “

“…that just slammed at me that there are lots of vets like her who can do—who should be able to do—anything they wanna do when they come home. There’s that, OK? Then there is me being a Gold Star kid. It makes it resonant with all the Gold Star families and there’s a lot of them. I never talked about it, but my real father died in 1949. He was a flight instructor for the first operational jet, which was an F-80. “

The 2019 VetsAid benefit will take place on November 10, 2019 in Houston, Texas, options for attending the event will be updated here shortly.

“It was always my intention to make this a traveling circus and bring the love to as many corners of this great country as possible. I wanted to take the show south, someplace a bit warmer than Tacoma was and, well, if there are any other basketball fans out there like me… On Sunday, November 10th, 2019, VetsAid is coming to Clutch City!”

Here is Joe Walsh doing what he loves most, playing music and spending time with military members. He discusses with the room his life associated to the military and the life that lead him to rock music.